I suppose it's the same for PS4. Getting that last trophy is now officially a lost cause.

Nah, they only nerfed the PC version AFAIK.

Yeah, last I heard every other version of the game still had the servers up. The Vita version works differently too apparently.
GLOBOX MOMENT!

The servers are up everywhere, but have been disabled on PC.

All right, now all that's left is to beat the cheaters.

i accidentally just made a lil dsicovery with the paintings whihc i had dowlnoaded off of spriters resource and its SUPER neat
so basically you know how theyre all cropped within the pic itself? i noticed the edges arent 100% clear transparency and tried to fill the alpha channel just to see them

turned out it filled WAY more of the image than i expected. as in like. it filled the entire rest of it

most of the other paintings are like that too!! though a few others have a solid color and one straight up just has the visible part of the painting zoomed in behind it. etc
but sometimes.. you may see lil pepperoni secrets hidden behind the alpha channel!!! like what appears to be debug ui and also just the games ui

how about some decapitated arms?

for the boss paintings you can even see the rest of the art! like here for example you can see more fire than you would normally

i dont know why is this just super cool to me

I did notice this on the levels that have animated paintings since they're all separate layers. I never really bothered to try it with those ones that are all in one layer.
GLOBOX MOMENT!

The one with the HUD is pretty cool. I guess they were feeling lazy when they made that one!

Nice find! Not sure we want that HUD on the wiki, though.

I even considered if I should have cropped some of those paintings a little more that I put on the Wiki. A lot of them were assembled in separate pieces, and since they only expect you to see whats within the frame on screen, the edges of some images are a little funky.

Like this one for example, the bridge looks a bit mad. 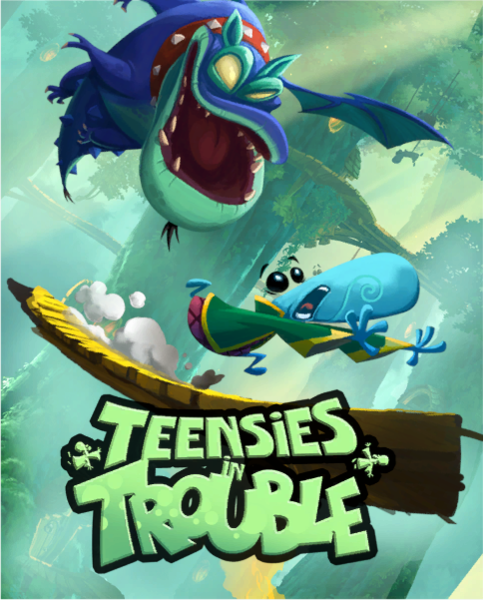 the lower right of the bridge was a little unfinished since you can't actually see it in game.
GLOBOX MOMENT!

No way to use the servers on PC?
Top

I don't think so, the servers have been down for a long time now.
Life happens. Just gotta roll with it!

Unfortunately not since last year when Ubisoft said they were working on it, then suddenly replied to someone else stating that they're not sure if they'll ever be back up.

I'm fairly sure RayCarrot said the servers themselves are still up, but the PC ones are just inactive for whatever reason. It's possible it has something to do with people cheating on the leaderboards, but then again this is just speculation.
GLOBOX MOMENT!

Also, how is the “Definitive Edition” for Switch?
Top

As far as I know, all characters in Origins and Legends are just skins. They all play the same.

But indeed, other than the warrior princesses (which are also basically palette swaps), I don't recall any new personalities in Legends other than Rayman, Globox and Teensies, which already existed in Origins.
Top

Yeah, they're just skins, really. Not that the personality of any of the core characters is explored at all in the UbiArt games...

yea they have descriptions like theyre all individual characters but they hardly feel like it and i like to think most of them are, in fact, just rayman or globox in stupid clothes (doesnt apply for teensies and barbara recolors though)
globox has a whole species though what was preventing them from at least giving them different colors?? instead of most of his alts literally looking like globox in stupid clothes??? cmon!

the Dark versions could probably be different characters though.

And The Princesses too
Top

I still can't get over how Grovebox's description says that he wears flowers to mask the smell since he doesn't shower.

ZelenPixel wrote: ↑
Sat Aug 01, 2020 1:59 pm
globox has a whole species though what was preventing them from at least giving them different colors?? instead of most of his alts literally looking like globox in stupid clothes??? cmon!

Even the Luigi costume Globox?

But yea, in reality, most of these costumes/characters pretty much play like the same 3 base characters (Rayman, Globox, Barbara). Don't the princesses ALL have the same voice too?
Life happens. Just gotta roll with it!