Look at this pleasant picture.
Rayman is sleeping calmly in a forest... Yes, he has taken a break that lasts eight hours after going on some adventures. 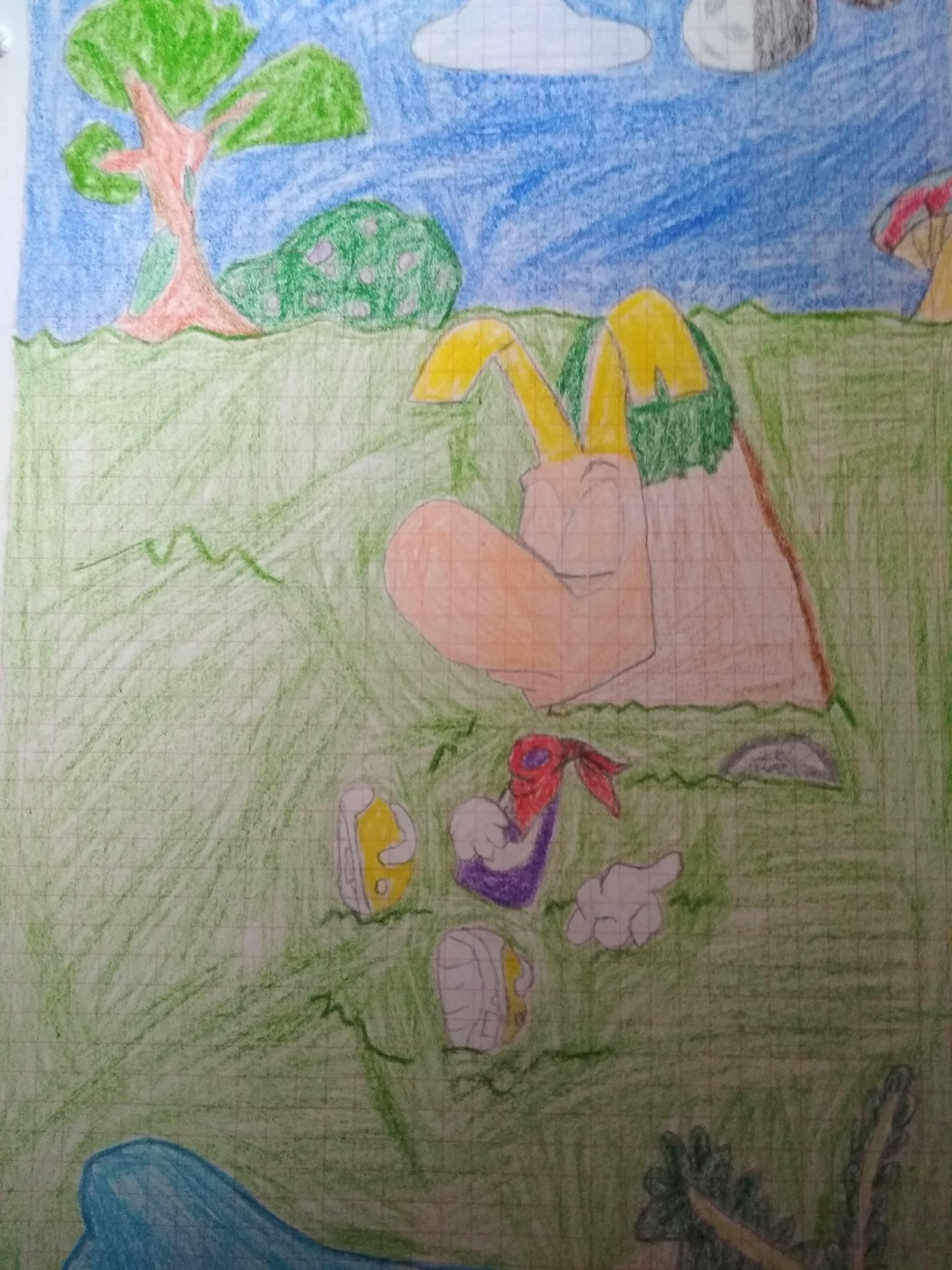 More fan arts drawn by me will be uploaded soon...

P.S.: I'm trying to add an original picture after I download it because I'm testing... It's my first time of using the Attachments, so there is a smaller and descriptive version of this drawing... Anyone can make mistakes but this can improve to be honest.

Rayman sleeping in a Forest

Meet Raychietta, the mascot of my RPC account and my de facto Raysona (Raymanish persona). She shares similarities with me such as being animal lovers, being ecologists, being smart, being tomboys, disliking bubblizing... It also shares in some flaws like being introvert and talk a lot about a specific topic sometimes... It differs from me that she is partially blonde, whereas I'm brunette. Another difference is that she has straight hair while I have it wavy. As for the defects she is often selfless, while I'm selfish sometimes. It also shows the difference in the species and her kinship, where she is a member of Rayman's species and she is part of Rayman's family (being created by Helena Handbasket in the Pseudoverse version of Glade of Dreams, as well as many UbiArt Framework games).
She is Rayman's maternal cousin who is interested in nature. She admires her laid-back cousin because she says that Rayman is her favourite cousin. She is the same age as Rayman, but in many fanarts I draw depict her as being 16-year-old teenage member of Rayman's species. Raychietta usually investigates things of nature in her world and she takes a healthy diet.

In the image above shows the depiction of Raychietta while in the image below there are sketches such as she interacting with a Snorty, one of the scrapped characters intended to appear in Rayman 3. Well, what do you think my Rayman original character?

P.S.: Sorry for the quality of the images, I had photographed them with my smartphone.

Reference about Raychietta, along with sketches featuring her.

Meet Aledis the blue G2 LPS-styled Yorkie dog. As her name suggests, she has progressive ideas and she is idealistic. She is feminist, she likes the nature and she is studious. She is the bookworm of her classroom, she is introvert and she is cynical sometimes. But Aledis is curious, smart, honest, polite and mature. She is Raychietta's close friend.

Although she doesn't fit in the Rayman fandom (because she fits in the Littlest Pet Shop fandom appropriately), you can see some Rayman references in the extended version of Aledis' Ref Sheet, such as the plum, Aledis being limbless and even Jano as a G2 LPS-styled shorthair cat. Those sketches make her a crossoveric original character.

Aledis' Extended Ref Sheet, along with some sketches such Aledis seeing a G2-styled mouse eating cheese and Aledis being hypnotised by the Guardian of the Cave of Bad Dreams.

In the Pseudoverse version of Glade of Dreams where dragons exists and so does the concept of bubble-made creatures, three Incrediballs (who are a Sniffler, a Green Piece and a Rhinoz) go to a forest full of dandelions and they meet four creatures which resembles anthropomorphic objects.

It's my first time in drawing the Incrediballs, as well those four creatures who appeared in the unnamed animated series' concept art. In my artstyle, I add the Incrediballs a stubby tail to have a more animalistic appearance. Also, sorry for the quality of the drawing, I have not colored it and there are parts that I have not revised with pencil.

Three Incrediballs (a Sniffler, a Green Piece (particularly Vern) and a Rhinoz) meeting four creatures who appeared on a concept of a new Rayman-inspired animated series.

Today is Rayman 2's 20th Anniversary. Being my favorite video game, I had to draw a picture based on it to celebrate the anniversary of its release.
In this drawing depicts Rayman going to cut the cake while the visitors (which are Rayman's allies who where introduced in Rayman 2, which Ly, Globox, Grand Minimus and Uglette are seen) they watch him with the intention of cutting the cake with the colors of many Lum types waiting to taste the cake.

I took a vertical picture on my mobile and, when trying to put it in Attachments, it appeared an error so I had no choice but to decrease its size.

I'm sorry for posting many times in this forum because nobody has answered in the images that I put, they have not even opined my drawings nor my artstyle. That's why I had to wait for someone to reply this forum.

I find it kind of funny (in a good way) that even thought it's the 20th anniversary, everyone in the drawing looks very young (it is almost like they went back in time). Uglette looks cute and I like how she breaks the 4th wall and winks at the viewer.

Elite Piranha wrote: ↑
Tue Oct 22, 2019 10:47 pm
I find it kind of funny (in a good way) that even thought it's the 20th anniversary, everyone in the drawing looks very young (it is almost like they went back in time). Uglette looks cute and I like how she breaks the 4th wall and winks at the viewer.

I'm glad someone liked one of my drawings.

UPDATED: Here's a drawing of Olympia, one of the 10 princesses. She is my favourite princess from UbiArt-made Rayman games.

What do you think of my drawing, counting my redesign proposal?

P.S.: Sorry for the image quality, on the right is a little bit blurry.

Olympia in my artstyle, along with my redesign proposal (pictured to the right)

I'm not knowledgeable about all the influences that you mentioned, but to me the new redesign is what she would look like if she was just a civilian instead of a warrior princess, good job!

Elite Piranha wrote: ↑
Tue Dec 31, 2019 11:47 pm
I'm not knowledgeable about all the influences that you mentioned, but to me the new redesign is what she would look like if she was just a civilian instead of a warrior princess, good job!

UPLOADED: I made a drawing depicting Rayman x Ly shipping called Romantic Reunion with a Mistletoe. As the fanart's title suggests, Ly and Rayman were reunited and they had love feelings while they see a giant mistletoe. Evidently, mistletoes symbolize love at Christmas.

And sorry, I had posted this picture after Christmas is over.

What do you think of my fan art?

P.S.: Again, sorry for the image quality, on the right is a little bit blurry.

Romantic Reunion with a Mistletoe

It's cute, keep on drawing!

Thanks! I'm glad you liked it.

UPLOADED: I take out one of the Rayman-related drawings I had done almost two years before... And I find an appropriate drawing for Valentine's day!

This drawing depicts Rayman grabbing a silver rose which makes a reference to Silver Lums. There, he thinks of Ly while expressing his feelings, that's why he is in love with her according to this fan art. 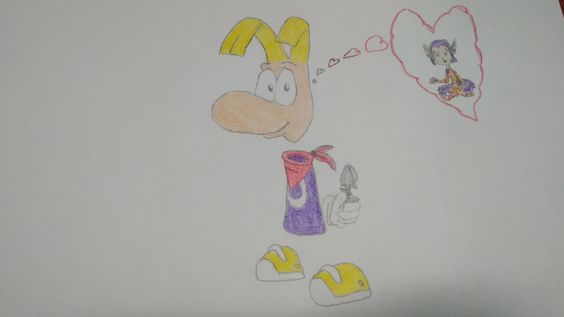 If someone asks me where this image comes from, it actually comes from Pinterest because I have got a Pinterest account since last year. And, sorry for the image quality...

What do you think of this slightly old Rayman x Ly-related drawing?