I've uploaded the files from my installation here: https://drive.google.com/open?id=1D3fPZ ... -k-5bUQaZm
You can replace the download link in the first post with this as it includes all needed files.
Top

I've updated the link, thanks.

"Something went wrong during setup. Press OK to try again"

I pressed cancel and the program showed up.

Well. Now I can further explore Rayman 2 maps like in Raymap online

You know you can download Unity and run a checked-out copy of Raymap locally, right?

I tried to export Glade of Dreams second level map of Rayman 2 The Great Escape in Unity to 3DS Max(Adsolution is usually using this software)(I'm usually using Blender)so I got some error that occured something like it can't find some files of ascii .ase plugin for 3DS Max 2009. Anyway generally speaking does anysone,someone here ever used old Unreal Editor 1 before?
Top

Hi guys, I just looked on raym.app site, then in the Raymap code on github. I think, since in the Raymap you are able to preview entities, trigger animations, setting playback speed etc., I played around a bit with it and I was able to export given frame of animation using Ninja Ripper. I'll dig deeper as I get editor working locally on my machine, then I try to modify it so that I can export currently visible geometry in each frame of animation (I mean Rayman 3 for now, for instance, but this could be any entity that you are able to trigger states on), then one could combine such captured geometries into individual animation clips, without using armature, but something like key shapes, or custom vertices interpolation mechanism between shapes (plus additional UV maps correction for each captured geometry, textures etc. all that kind of stuff). I can isolate Rayman from the rest of the scene geometry by moving him far far away from the scene, thus the only geometry being captured by the Ninja Ripper is the Rayman himself. But I think that this stuff implemented in the editor will be simpler to obtain.

What I mean basically is this


And here is one frame of running animation, done hard way to prove the concept 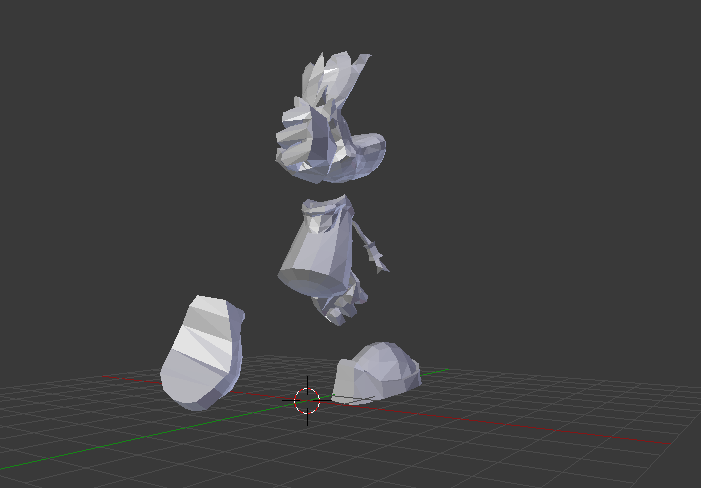 My question is, would it be difficult or time consuming to implement it as a feature in the editor to rip entity animations, or I need to dig into the editor myself with no help? xd U2B wrote: ↑Thu Dec 05, 2019 10:32 pmMy question is, would it be difficult or time consuming to implement it as a feature in the editor to rip entity animations, or I need to dig into the editor myself with no help? xd

Hey U2B. Exporting models & animations is a feature that has been requested a few times already. bunnieblaster already coded a working Rayman 2 animation export feature (and import to Blender). Rayman 3's animations are a bit more complicated though, and this export feature isn't the most fun thing to work on, so we haven't started on making this. Perhaps you would be willing to help? Do you have any experience with scripting in C# and Python? Let me know if you are interested.
Top

If I come up with something, I'll upload code somewhere on the GitHub. I also check this feature with exporting Rayman 2 animations. If I have questions, I'll contact you, thank you!

I'd recommend contacting him on GitHub or Twitter.
Top

If it still happens for someone: