I've started a Rayman 1 for PlayStation Spanish translation project. I've translated the game texts from the PAL edition (SLES-00049), the PC Strings and the two FMV dialogs, but I need help to complete it.

In the European version, the main texts can be found in the directory "ray\ima\crd" in plain text format using OEM-US Encoding (Code Page: 437); being "rayus.txt" for English, "rayfr.txt" for French and "raygr.txt" for German. But three strings from the Magician Challenge are inside the game executable (sles_000.49) and I'd like to change their lengths; unfortunately, I haven't found their pointers and I don't know about assembler... They are:

Other problem is the fonts: They don't support accented chars (Except 'ü' & 'ö' in the European version) I've found the 2 files with the fonts:

"ray\ray.xxx" - I don't know the format of this file and I couldn't find any information about it... It contains the small font and the main game sprites; and the definition of these sprites and font too. Some of these sprites are in 256 colors and other ones in 4 bpp/16 colors.

My idea is to remove the language selector and to remove the big font replacing it with the medium (The big one is only used for the Magician Challenge and they are very similar) This way, I could get extra space to add the new special chars in the "ray\let2.img" file (I need the special chars: áéíóúüñ¡¿ for my Spanish translation)

I've discovered the medium font sprite limits, but I haven't found their references; I've tried to search the possible values without success. I don't have experience with the PSX VRAM textures referencing and I don't know how they work exactly...

PS: The files CD position are stored in the executable, but this file could be extended in the worst of cases; just after of the executable is a dummy file (dummy.pwd) and its size is 16 KB.

Hi and welcome to this place! You can introduce yourself here if you like.

While the original release doesn't come with a Spanish version, Rayman Advance does, and it features tildes (e.g. "El Bosque de Sueño"), so you might want to check how it's done in that version.

You might notice that the name there is slightly different; the original one, "El Bosque de los Sueños", comes from the manual of the original release, which, unlike the game, came in Spanish too (and Italian, for that matter). In fact, every world besides "Las Cuevas de Skops" was renamed in Rayman Advance: "La Tierra de las Bandas Musicales" is "Musicalandia", "Las Montañas Azules" is "Las Cumbres Azules", "La Ciudad de las Imágenes" is "La Ciudad Imagen" and "El Castillo de Dulces" is "El Castillo Dulce".

Thanks for your response Hunchman801

I've done a full retranslation to Castilian Spanish; I didn't take the original manual nor the GameBoy Advanced translations as a reference.

A sample of my translation: The font sprites from the GameBoy Advance version uses fewer colors than PlayStation one, but they could be used as a reference 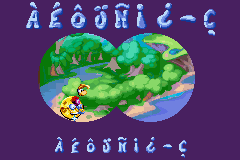 My main goal is to translate the PlayStation PAL version to Castilian Spanish now; but, I'd like to investigate others platforms just like MS-DOS & Saturn and, to add more translations later too.

PS: I attached a download link to my translation text files in the first message

Good luck then! Maybe once finished, your translation could be added to Carrot's Rayman Control Panel? Not sure if it's possible at the moment, though.

Sorry to bump this, but this is pretty important. We recently discovered there is an official Spanish translation of the PC version of Rayman 1, and also it seems to contain Italian and Dutch translations, so if this mod is still being worked on, you could base the translation off of this version:

Interesting, I never knew there was an official Polish translation. Not sure where to find it though.

No. It's not official.
https://grajpopolsku.pl/forum/viewtopic.php?t=739
It's also worth to note that there were some attempts in editing the type in this thread, and some technical info.

@OP Maybe you could ask there for help with pointers issue. Sent DM to the author because it was 10 years ago. And it's seems like she wasn't able to decode properly the type, and you already did it. You would say also here how you did that.

In the very end, if anything else fails, maybe you could edit current diacritic marks of existing translation, and use them always in place of old marks.
E.g. if it's German, use their charset in text file - so exactly how it was coded originally, and use their diacritic marks in your translation, but in the end just edit the type so the game will still use German diacritic marks internally, but externally showing your language accent marks.
Find and replace option in some text editor will be useful in editing the translation. Proper option should replace all specific marks automatically.
Rayman 2 Soundtrack PSX (HQ CD like - 44kHz FLAC/Mp3) + Revolution - 31 exclusive tracks & others remastered | Rayman 3 HD High Quality Soundtrack (Ubi Remaster) FLAC/ Mp3 | Rayman 2 Graphics mod Reshade | Rayman 2 32 bit color fix | Rayman 3 Reshade | AI uspcaled and remade HD tex mod for PC | for Gamecube | Rayman 2 PC HD Texture Mod AI | Rayman M/Arena AI HD Tex Mod | Rayman 2 Rayman 3 Rayman M Widescreen Patch | Arena Widescreen Patch | Rayman 2 Revolution PCSX2 - get v. 1.4.0 and up for emulation speed up /or this fix | Revolution 60 FPS hack | Tonic Trouble OST 44kHz!
Top

Oh, too bad! Have you checked if it's a good quality translation anyway?

Still, I'm surprised the original never got an official Polish translation, not even in the latest ports.

Meh. No one cared back then - publishers or distributors to be precise.
I think in those days, more common were unofficial translations, even dubbings. Official ones were a bit later, and only since then, official language packs were made in everyday terms when one of the publishers started to release them. But it was later.
E.g. search on YT for "Max Payne Bazarowe Tłumaczenie" it was released some time before official Polish dubbing release AFAIK.
It's made by a guy whose pirate games were sold on Warsaw Market, and he was doing his own half-polish, half-russian dubbings which are considered to be legendary to this day. In sense of humour mainly, but still. It was popular in the whole country. Some people even wasn't aware that some of these releases wasn't official. E.g. Age of Empires II which never received official polish dubbing, but somehow I've managed to play such version...
Just a curiosity.
Rayman 2 Soundtrack PSX (HQ CD like - 44kHz FLAC/Mp3) + Revolution - 31 exclusive tracks & others remastered | Rayman 3 HD High Quality Soundtrack (Ubi Remaster) FLAC/ Mp3 | Rayman 2 Graphics mod Reshade | Rayman 2 32 bit color fix | Rayman 3 Reshade | AI uspcaled and remade HD tex mod for PC | for Gamecube | Rayman 2 PC HD Texture Mod AI | Rayman M/Arena AI HD Tex Mod | Rayman 2 Rayman 3 Rayman M Widescreen Patch | Arena Widescreen Patch | Rayman 2 Revolution PCSX2 - get v. 1.4.0 and up for emulation speed up /or this fix | Revolution 60 FPS hack | Tonic Trouble OST 44kHz!
Top

I haven't visited the forums for a looong time...

@Hunchman801: RayCarrot has my permission to use my modified files in his Rayman Control Panel program. He's helping me with my translation project a lot

@ICUP321: I've chosen to make my own translation to avoid legal issues. A friend sent the "ray.lng" file to me form the official Spanish translation, but the author of that translation took too many artistic liberties...

About my project: The text revision is almost finished

The next step is to work on the audio base for the future dubbing. Our collaborator gadesx shared the fireworks sample from the Ending Sequence with us, and Levc-EGM recreated the "Rayman Relax Beach" theme from the Introduction Sequence (It sounds a lot like the original) Now we need to find the another samples from the Introduction Sequence; if somebody could help us with that, it'd be amazing! (Maybe they're in the "The General Series 6000" pack. I read something about that in this thread)

We're working in a Latin-American Spanish and Catalan translations now too; and we'd like to add more translations!

Great news! I can't wait to see all those translations released.

Great project!
I'd like to add hebrew translation if possible
I have drawn some (about 70%) of the alphabet
and translated and dubbed the intro video (here if someone intersted: https://youtu.be/UTvilcVCZJo)
(the playback is by using online vocal remover)

Can you please share more information on the technical side?
Thanks
Top

I didn't understand a word of your dubbing besides shalom but I find the quality very commendable nonetheless! Hope this can be included too.

@Hunchman801: Thanks for your support

@rzil: That dub is really good

I don't know how to edit the font sprites in MS-DOS yet... Anyway, here is the "ray.lng" file sections info:

The cheksum is a summatory of all the bytes of that section.

Try your luck with the PlayStation PAL Version. Try to replace the Latin chars with the Hebrew ones; just like the Russian Version did. They're in the "ray\ray.xxx" and "ray\let2.img" files (Just like I said in the first message) The languages files are in the folder: "\ray\ima\crd\"; you can use the "psx-mode2" tool by CUE to replace them (Be careful with the sector size; every sector is 2 Kb. English file requires to use 2 sectors and French & German ones 3; than means the English file must be between 2 Kb and 3.99 Kb)