Golly G. Golem is the fifth level of the Mystical Pique, the fifth world in Rayman Origins. In this level, the heroes battle the Golem, a gigantic statue of living rock. This is the second level from this world, and thirty-fourth overall that's included in the Back to Origins painting in Rayman Legends.

The heroes arrive in a snowy environment. They will need to use the wall running ability to climb, where a couple of stone men will block their path. The exit can be found near the second stone man; before exiting, the first Skull Coin can be collected by using a rope in order to reach a platform, where the power to run on walls can be used to reach coin. 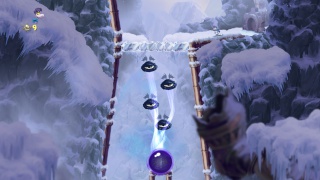 The heroes need to properly time a crush attack in order to defeat all of the Psychlops and break the Electoon cage.

The heroes arrive in a strange cave like area, where they must avoid the spikes, as they take advantage of the wall running power and use the Fakirs to proceed. The third Skull Coin can be safely retrieved by using the glide power to avoid the spikes directly beneath the coin. The exit can be found just to the right of the spikes. 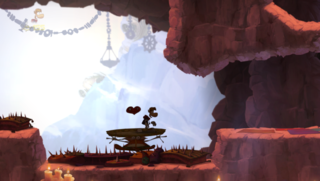 The first relic can be found below the Fakir that Rayman is standing on.

The first relic can be found in this area below a meditating Fakir. 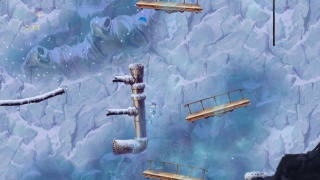 The falling platforms are centered around in this area.

As the heroes enter this area, they will need to defeat the three Darktoons in their way. The second secret area can be found by dropping down to a black rope then jumping to the right. Afterwards, the heroes will need to constantly use the wall run ability to climb and reach exit, while avoiding Darkroots along the way. 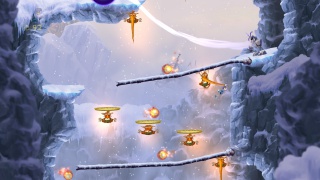 In order to reach the Electoon cage, the heroes will need to avoid or hit the incoming lava rocks being thrown by a stone man, as they climb to the top of the area; Fakirs can be used as platforms to help them reach the top. Once the stone man has been defeated, the cage can be broken. 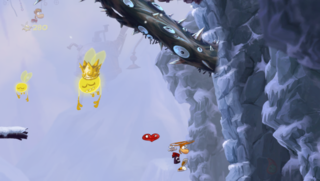 The second relic can be found inside the wall, just to the right of Rayman.

The second relic can be found in this area; it is located in side a wall near the Lum King. 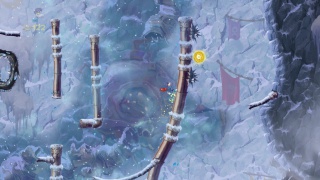 The sixth Skull Coin of the level.

Similar to the fourth area, the heroes will need to climb up by using the moving platforms. The sixth Skull Coin can be found on a long pipe in between two Darktoons, attached to the side of the pipe. Once the heroes reach the top, the exit can be found to their right. 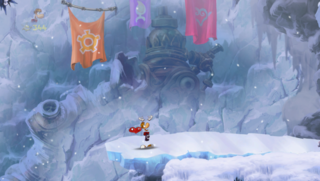 The third relic can be found in the flag located directly above Rayman.

The third relic can be found in this area; it is located in a flag near the exit.

As the heroes proceed in this cave area, they encounter the boss of the Mystical Pique, Golem. He can be defeated by waiting, then using paths to reach and punch the vulnerable bubos. Once all three bubos have been hit, Golem will be defeated and sink down, causing platforms including nenuphars to appear, which the heroes can use to climb towards the exit. 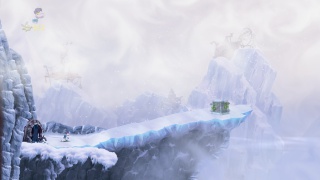 The final area only has the Electoon cage, no enemies.

All the heroes need to do here is break the Electoon cage to finish the level; the heroes pose on the photoboard as the Magician waits for the total amount of Lums that were collected throughout the level.