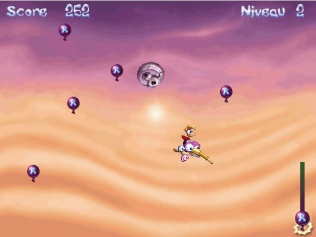 In the original Rayman game, balloons themselves cannot be found; however, in the PlayStation and Jaguar versions, an enormous present-shaped balloon can be seen on the map of the valley. No reason is ever given for its presence. Balloons appear much more frequently in the spin-offs based on the original game: in Rayman Designer, purple balloons bearing the white letter ‘R’ – thus giving them a resemblance to Rayman's symbol – often appear in the new areas, and the played can also add them to their own custom levels. These balloons levitate in one spot; Rayman can inflate them by punching them with his telescopic fist. When he stands of them, they deflate within a fraction of a second, creating new platforming challenges not present in the original game. These balloons also appear in Rayman Collector's le bouingue minigame, where Rayman must pop them with the help of Bzzit. 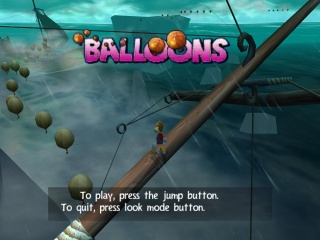 In Rayman 3: Hoodlum Havoc, balloons make a much more prominent appearance than they do in any other game in the series. Rayman and the Hoodlums both use balloons as a means of travel. Large balloons known as Hoodlum Zeppelins carry various Hoodlums from one place to another. On their sides they bear crude insignia depicting Black Lums. Smaller balloons are used by individual Hoodlums as a means of travel and are usually found deep within their territory. The Hoodlums like this method of travel because ‘it’s exotic, it’s sporty it weeds out the clumsier soldiers’. A single Hoodlum holding one of these balloons is capable of flight. The cages in which the Teensies are imprisoned are usually found suspended in the air by a floating balloon. Rayman often finds chains of balloons unattended, and can use them as platforms; touching one will cause it to pop, sending Rayman bouncing high into the air. They quickly re-appear so that they can be used as platforms once more. One minigame, simply titled ‘Balloons’, revolves solely around this type of type of travel; Rayman must use chains comprising hundreds of balloons to cross a series of ships and icebergs in the Looming Sea.