From RayWiki, the Rayman wiki
Revision as of 05:48, 3 September 2019 by Steo (talk | contribs) (These are not sea anemones, they are another type of tentacle claw that still attack in the light.)
(diff) ← Older revision | Latest revision (diff) | Newer revision → (diff)
Jump to navigation Jump to search

Beware of Mini-Murray is the fourth level of the Angsty Abyss, a world in Rayman Origins. In this level, Rayman and the team continue to swim in the sea, avoiding dangers along the way. This level is the third one from this world and twenty-ninth overall that's included in the Back to Origins mode in Rayman Legends.

After falling into the water because of a platform collapsing, the first Skull Coin can already be found. It is located to the far left. After a short time of swimming, deadly dragonflies appear, and the heroes must get to the exit before the dragonflies come into contact with them. The second Skull Coin can be collected by taking the higher path during the escape. 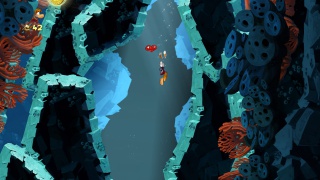 The second part has the player once again being chased by dragonflies.

The team now arrives to a more peaceful area. Though there are still Blowfish, rock statues that suck in air and later on, Swordfish. The first secret area can be found by dodging a Swordfish from up high, then going to the path of where it originally was. Once done, the heroes can advance to the exit. 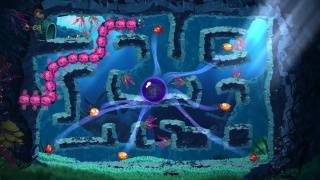 In this maze looking area, the players need to hurry as they destroy the Blowfish and Redfish, as a large purple Murray is following nearby. Once the enemies are defeated, the cage can be broken open.

Shortly, the fourth Skull Coin can be acquired by going up, while passing two groups of jellyfish. Later, the heroes need to be quick if they want to defeat the sea anemone. The second secret area is located down through a small gap, close to a scenery piece. The fifth Skull Coin can be collected by passing through a rock creature near the exit. 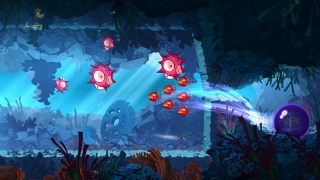 Here, Rayman and his team need to safely get by the moving spiky fishes, to the group of Redfish that must be defeated to break open the Electoon cage.

The team now needs to swim downwards to continue on. There are many Blowfish and some purple Murrays in the pathway. 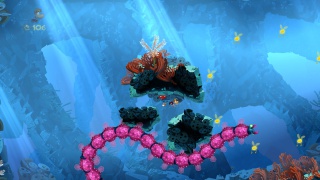 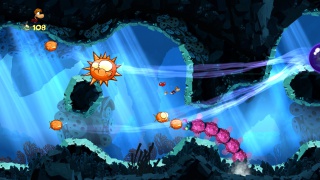 The heroes have to destroy the Blowfish in the area, while being followed by a purple Murray. Once all Blowfish are defeated, the Electoon cage can be broken to end the level. The players will then pose on the photoboard as the Magician waits for the total amount of Lums that were collected in the level.