Difference between revisions of "Bimbette"

My name's Bimbette. I'm a coquette. You have to accept me as I am.
—Bimbette, Globox Village

You got here just in time...the pirates wanted to test out a new weapon on me.
—Bimbette, to Rayman, Rayman Revolution

Bimbette is a baby Globox and, as such, is one of Globox and Uglette's 650 children. She is one of the eight playable babies that appear in the minigame Globox Disc in the Dreamcast version of Rayman 2: The Great Escape and in Rayman Revolution. In the former, she can be seen in the Globox Village from which the minigame is accessed from. Her name is most likely derived from the word 'bimbo' and the suffix '-ette'. 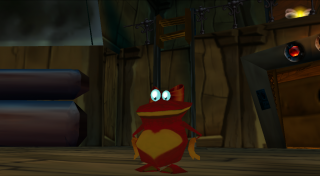 Bimbette, as seen in the Pirate Factory in Rayman Revolution

Bimbette is a flirtatious baby Globox and her skin is a darker pink colour than that of her many sisters. She has a prominent pink bow on her head (although, like most other Globoxes, she has no hair). While most of her family all have white ovals on their bellies, (with the exception of Hardrox) Bimbette has a white heart-shape. Unlike her sisters, Bimbette (a self-proclaimed 'coquette') is strangely suggestive when speaking with Rayman; in the Globox Village, she says, ‘It's so hot here! I wish I could take off my ... but I don't dare.’ Presumably she is talking about her bow.

In Rayman Revolution, Rayman encounters Bimbette when he destroys the cage hanging from the ceiling of the top room in the Pirate Factory. She was going to be used as a guinea pig for the Spyglass Pirate to test a new weapon on, and, when freed, quickly warns Rayman to prepare himself for battle. When Boss Biditank arrives, Bimbette rushes over to the laser and tells Rayman to press the generators to turn it on. Throughout the battle, she resides on the laser. After the Spyglass Pirate is defeated, Bimbette leaves the Pirate Factory for good.

In the Dreamcast version of Rayman 2, Bimbette can be found running around in the Globox Village with her siblings.

In both the Dreamcast and PlayStation 2 versions, Bimbette is a playable character in Globox Disc.