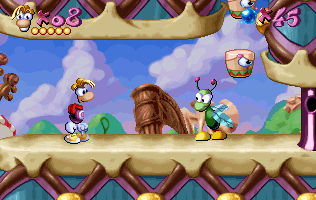 Phase 2 introduces Rayman and the player to Flying Moths, which are extremely resistant enemies. There are some Wrong Notes that, if not jumped over properly, will cause the player to lose a life.

Rayman will mainly use Maracas_rocket Maracas Rockets to ascend this area. There are many spiked balls that can cause the player to lose lives.