A group of Teensies using a Bonton for transportation 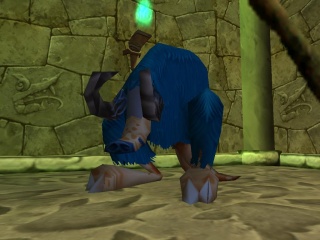 A blue Bonton as seen in the Xowar secret

Bontons, also known as Flabars, are creatures which resemble kangaroos or goats. They have brown or blue fur (blue in the Xowar secret). Some have horns. The Teensie tribe known as the Sylkins tend the Bontons for their wool and milk, and some Sylkins are seen shepherding them in the Rayman 3 intro sequence.

The Bontons are harvested by the Black Lums, who use their wool to weave Hoodlum outfits for themselves. At one point in Rayman 3, the Black Lums are seen attacking a Bonton like a swarm of locusts in order to steal its fur. However, the instruction manual has stated that the Black Lums just use animal fur in general. The Snorty was also dressed in animal hide, which could have been Flabar fur.

An in-game model for the Bonton was created, but when the creature was cut from Rayman 3, the developers decided to hide a blue, horned Bonton in a secret room so that their work would not entirely go to waste. The room also contains other unused models, such as the Xowar and a Glute.

The Bonton was initially intended to play a much larger role in Rayman 3. The Bonton, known then as the Flabar, served to introduce "puzzle" elements. Depending on its various physical attributes (horns, wings, trunk, very thick fur, etc.), the Bonton had the very precise function of unblocking the player in the level. For example, Rayman could make the horned Bontons charge to ram down certain doors, or fly on the backs of the winged ones to reach otherwise inaccessible places. But since the game design for this creature was unsatisfactory, in the end it was used only to supply the Hoodlums with raw material to make their clothing (as the introduction to the game shows).