Brainox is a baby Globox and, as such, is one of Globox and Uglette's 650 children. He is one of the eight playable babies that appear in the minigame Globox Disc in the Dreamcast version of Rayman 2: The Great Escape and in Rayman Revolution. In the former, he can also be encountered in Globox Village, which is where the minigame is accessed from. 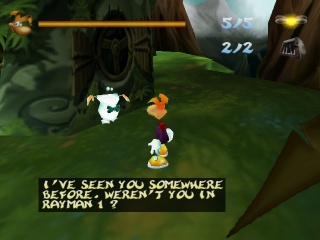 Brainox paradoxically seems to be a fan of the original game.

Brainox appears to suffer from albinism – he has white skin and red pupils. He also wears a ragged black bow tie. As his name suggests, he is a very intelligent baby, like his sister Oktette. He sometimes makes a meta-fictional reference by saying to the hero, ‘I've seen you somewhere before. Weren't you in Rayman 1?’ He shows great fascination with Rayman's limblessness, proclaiming ‘No arms and no legs? You're a fascinating enigma.’ This sentiment is strange, considering the fact that all Globoxes, including Brainox, have floating, disconnected feet like Rayman's.