Difference between revisions of "Bubble" 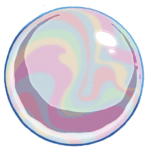 A typical bubble in Rayman Origins

Every creature living in the Glade of Dreams is born as a bubble, takes it's own form, and dies as a bubble.[1] When a creature dies (Not necessarily a creature created by the Bubble Dreamer but anyone who inhabit the Glade), it's body inflates taking the form of a balloon until it explodes; this act is formally known as "bubblizing". The process of bubblizing and the strong relation between bubbles and dreams are notable for being one of the strongest canon-breaking elements in the franchise, as bubbles and their magical properties started to take an important role in Rayman Origins and continued on in later games, but have never been seen in previous Rayman games.

As Bubbles compose everything in the Glade, they assume various roles through the game. Roles include:

Bubbles can be found anywhere in the levels, containing single Lums, groups of Lums, Hearts, and more uncommonly, Skull Coins and Blue Punch gloves. Some objects like for example water lilies, produce bubbles which means these objects contain hidden collectibles. Bulb-o-Lums also contain air bubbles inside. Items contained in bubbles must be collected as quickly as possible, as they disappear after a short period. A rare case of a Darktoon trapped inside of a bubble can be seen in the level 'Savage Swarms' at the Grumbling Grottos; instead of collecting it, the players must slap it to defeat the Darktoon.

A special kind of roulette bubbles was intended to make an appearance in the game. These bubbles rotated between various collectables, including Lums, Blue Punch gloves, Hearts and Lives. This concept was scrapped in the final version of the game. 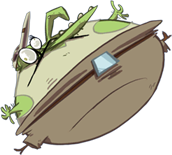 Bubblizing takes an important role in-game. When most of the characters are defeated (this includes Rayman), they inflates like bubbles, although being bubblized can be avoided if Rayman carries a Heart to protect himself. In the case of enemies, they add a Lum to the player's score when they get bubblized (or many Lums, depending on the game) ; In 'Rayman Origins, the enemies float for a short period in their bubblized form after they get hit for the first time, and popping their bubbles while they're floating gives the player a bonus Lum. This bonus can be duplied if the player is carrying a singing Lum King. The bonus lum mechanic was removed in later games due to its pace-breaking nature, and bubblized enemies explode automatically since Rayman Legends.

While Bubblizing an enemy in Rayman Origins gives the player 1 lum, Rayman Legends gives 5 lums to the player, and Rayman Adventures gives 10 lums.

In multiplayer mode, players can manipulate their bubblized bodies with the analog stick. To go back to life, they must move close to another player and receive a slap. This gives the player an opportunity to return to the stage and continue playing; however, if all of the players are bubblized at once, they will all explode and return to the last checkpoint.

A different kind of bubbles make an appearance in the Gourmand Land. These bubbles come out from the mouths of Sleeping Dragons and can be ridden as bouncy platforms as they float. In order to keep a balance in the altitude with their weight, the players must constantly jump on top of the bubble, avoiding any spiky obstacle that could pop the bubble.

Several bubbles containing smoke inside can be seen at the Snoring Tree. By collecting a certain amount of Electoons indicated by Murfy, the smoke of one of the bubbles will disappear and a new character will appear dancing inside of it. By touching the unlocked bubbles, the player is able to choose a different character; as long as the player keeps collecting Electoons to restore the Bubble Dreamer's mind, the number of playable characters will increase. Two players can't choose the same character until the Land of the Livid Dead is beaten.