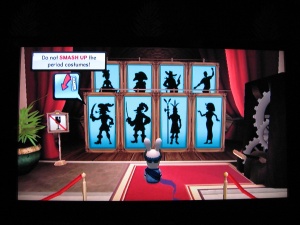 The Costumes Hall in the museum

‘An impressive collection of period costumes and clothing from all eras. Do not touch!’ — Professor Albert Einequen's quote in Raving Rabbids Travel in Time's manual

The Costumes Hall is one of the Museum's sections in Raving Rabbids Travel In Time. This area from the Main Hall contains the unlocked costumes that the Rabbids can dress up. To dress them, the Rabbid must strike into the blue boards containing silluettes of the correspondent costume. To look for more costumes, the player must pull the lever in the right side, since the area only shows eight costumes at time. In the beggining of the game, few are available for dressing, but more are unlocked as long as the player keeps playing the minigames in both types of endings (orange ending and purple ending). One costume is exclusive to the owners of Raving Rabbids Travel in Time Collector Edition: the Emperor Ceasar costume is unlocked by inserting into the unlockables screen in the Trophy Hall, a code written in a panflet inside the game box. This area cannot be acessed either in Meet-Up Mode or Online Partner mode.

The Costumes Hall area has got at total 34 costumes: