The evil Dark Rayman just appeared and invaded 6 paintings! Go back to the worlds you already saved to face him in new Invasion paintings and save new Teensies!
—Polokus, Rayman Legends

Dark Rayman is an enemy which appear in Rayman Legends.

Dark Rayman is a clone of Rayman, magically created to destroy the original.

His appearance is very similar to that of Rayman, but with different colouration. He is almost completely dark with a purple aura emanating from his body. He also has glowing yellow eyes. At certain points, Dark Rayman's crazy evil laughter can be heard, revealing a high pitched, echoed version of Rayman's voice. This laughter, along with other variable noises, can be heard at the beginning of the challenge or when Rayman is defeated.

Dark Rayman is an allusion to Bad Rayman, an evil clone of Rayman created by Mr Dark which appear in the original game. But unlike Bad Rayman, the creator of Dark Rayman is unknown. Maybe it is the Dark Teensies, the antagonists of Rayman Legends, who are admirers of Mr Dark, but nothing permits to prove it.

Dark Rayman appears in the last Invasion levels of Rayman Legends, in which Rayman, in addition to having to reach a group of Teensies before a certain amount of time while defeating enemies from another world and avoiding obstacles, must also avoid contact with Dark Rayman, who follows him and repeats his moves. This makes these levels some of the most challenging in the game. 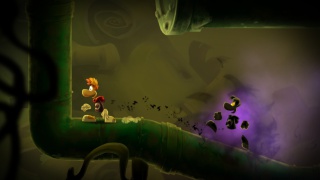