Dark creatures are common obstacles in Olympus Maximus. They are vicious hordes of monsters that instantly kill anything they touch. They can be killed only by purple mushrooms found in Olympus Maximus. However, they can survive when there are huge quantities. When first found, they appear to be imprisoned. It is currently unknown why, though it may be related to the fact that the dark creatures come to form the Dark Cloud, the final boss of Rayman Legends. Aside from the mushrooms of Olympus Maximus, their only weakness is the Blue Punch.

They resemble small, furry balls, with two tiny arms and mouths with sharp teeth. The dark creatures have three different eye colours: blue, when in contact with the mushroom's explosions, green, when not having a player nearby, and red, when spotting a player. 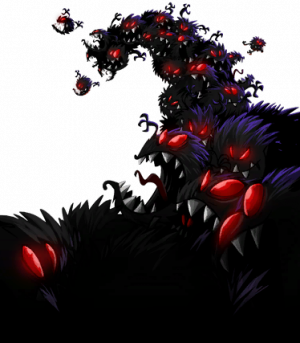