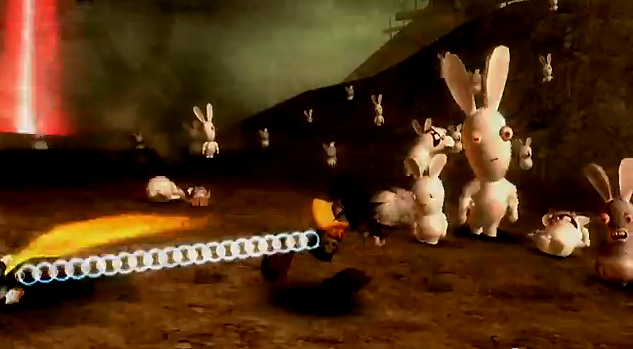 In the only trailer of the beta of Rayman Raving Rabbids, you can see a red laser for a second. This red laser which you can see in the left upper corner is the named laser. It is unknown where it comes from, because, if you watch the trailer closely, when Rayman starts to swing the Rabbid in the picture, the red laser isn't there. After seconds, it comes out of nowhere. One can only guess what this should have been. Actually, at the beginning of the trailer, a huge Rabbid roboter appears and shoots a red laser. Maybe this red laser is a laser from the named roboter. But it's only a guess.

Click on a date/time to view the file as it appeared at that time.

The following page uses this file:

The following other wikis use this file:

This file contains additional information, probably added from the digital camera or scanner used to create or digitize it.

If the file has been modified from its original state, some details may not fully reflect the modified file.