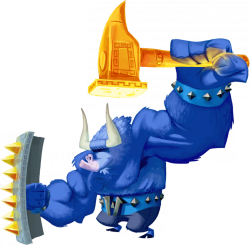 Giant Minotaurs are large versions of the Minotaurs encountered at Olympus Maximus. It appears to be the Olympus version of the Frankys encountered in Teensies In Trouble. They hold a fiery hammer and a spiked shield and appear to be among the biggest soldiers of the army of nightmares that live in Olympus Maximus, topped by only the dragons and the Dark Cloud.