GlobTeen is an unlockable Teensy character in Rayman Origins and Rayman Legends.

Like Raybox, GlobTeen wears a Globox costume and sharing his colour scheme. Unlike Teensy Ray, the Bubble Dreamer treats Globteen as someone of no importance, calling him "just another fanboy". GlobTeen dresses as Globox due to his admiration for him, much like Teensy Ray's admiration of Rayman. Is unknown if GlobTeen and Teensy Ray have any kind of connection, or if GlobTeen is a member of Teensy Ray's fanclub, as both have dressed themselves as the heroes of the Glade of Dreams. Like the Photographer, GlobTeen is one of the few Teensies who have bulging eyes, which increases his resemblance to Globox.

Bubble-me! Globox...You're teensy! Now that's just not right! OH, it's not you, Globox? Pfft...just another fanboy! You need a name, hmmm... Little boy blue? Nah, that's taken. Sharkboy! ...Getting there... I know! GlobTeen! What! It's better than fanboy.
—Bubble Dreamer, Rayman Origins

In Rayman Origins he is unlocked once 38 Electoons have been collected.

Surprisingly, there's actually one Teensy that admires Globox enough to dress and paint himself like him.
—In-game description, Rayman Legends

In Rayman Legends he is unlocked once 14 000 Lums have been collected in the PC, Xbox 360, PlayStation 3 and PlayStation Vita versions and 20 000 Lums in the Wii U, Xbox One, PlayStation 4 and Nintendo Switch versions. 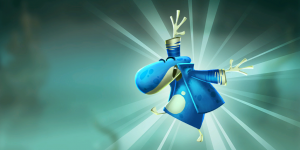 GlobTeen as he would have appeared in Rayman Adventures.