Glombrox is a member of Globox's species who appears as a playable character in Rayman Origins, Rayman Legends and Rayman Fiesta Run. Much like Dark Globox from Rayman Arena, Glombrox seems to be Globox's evil doppelgänger. 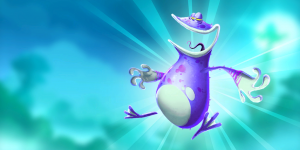