Difference between revisions of "Go With The Flow"

Go With The Flow is the fifth level of the Jibberish Jungle, the first world in Rayman Origins. The landscape is situated on a river with multiple waterfalls, which requires Rayman and friends to use the speed of the waterfalls as a method to advance through the level. The name of the level presumably comes from the song of the same name by Queens of the Stone Age. This is the third level from this world that is not featured in the Back to Origins mode in Rayman Legends.

The heroes find the Magician on the left side, who instructs them on how to use the crush attack. The adventure continues as the heroes run along some water currents, while using the crush attack to break the wooden barriers that block their way. The first Skull Coin can be found near the bottom of the area; the heroes must use the flower bumper to get impulsed to the area where it is floating, then quickly perform a walljump to avoid the spiky flowers. Afterwards, the heroes can crush attack the last wooden platform and the Lividstone below, then the grassy platform to the right will descend, revealing the exit.

The next area has two Lividstones waiting for the heroes. The heroes must defeat them and continue their journey through more water currents. They will need to avoid spiky flowers using the help of a Swingman, then break some wooden barriers and platforms along their way. The heroes eventually fall into the water, but a spiky flower blocks their way. In order to get to the other side (as the heroes do not have the ability to swim yet), they must hit the blue bulb, in order to make the spiky flower disappear and advance to the exit. 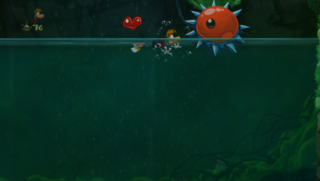 The first relic can be found at the bottom of the water, underneath the spiky flower.

The first relic can be found in this area; it is underwater, directly below a spiky flower.

Similar to the second area, two enemies appear, but this time it is Darktoons instead of Lividstones. Next to them is another water current, which leads the heroes to a wooden barrier. The second Skull Coin is visible after that; to collect it, the heroes must perform a walljump correctly, avoiding the spiky flowers on the walls. A horizontal vine can be seen in the lowest area; dropping down from the vine will reveal the first secret area with a hidden Electoon cage. As the heroes proceed, they approach a wooden barrier with a Lividstone right behind it. They will then approach a geyser, followed by some flower bumpers and another Lividstone, where the heroes can then find the exit.

At the start of the area, there is an upper gauntlet where the third Skull Coin can be found, below it is a wooden barrier with a Lividstone behind it; in order to collect the coin, the heroes will need to wall jump to the above platform, then hit some blue bulbs in mid air, to avoid spiky flowers and land on the flower bumpers. Then the heroes need to cross a water current to reach a flower bumper, where they will bounce up to find a wooden barrier. Once broken, the water current will take the heroes to another flower bumper, which will lead them to bounce over a stationary spiky Darktoon and find the exit. 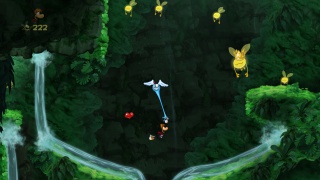 The fifth area of the level. 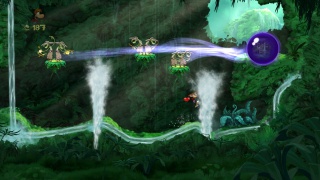 There are two geysers that the heroes must use to reach the Lividstones, which are standing on nenuphars above. When all six of them are defeated, the cage located on the far right of the area can be broken.

After breaking a bottle containing a heart, the heroes will cross a water current and bounce on some flower bumpers, eventually reaching a champibumper that will launch them into the background. 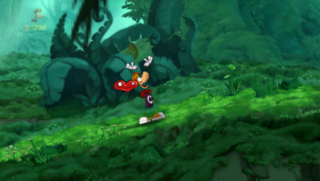 The second relic can be found behind these bushes, just above Rayman's hands.

The second relic can be found behind some small green bushes, just as the heroes enter this area.

There are only two Lividstones to defeat. The one on the ground can be destroyed in two ways, the heroes can either jump on top of a spiky platform making it descend, instantly killing the Lividstone, or they can defeat him manually; the other Lividstone is standing on a nenuphar above. Defeating both will allow the cage to be broken, ending the level; the heroes pose on a photoboard, as the Magician waits to see how many Lums the heroes have collected throughout the level. 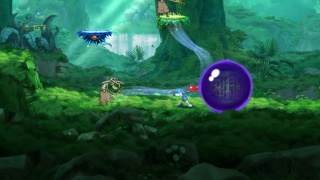 The seventh and final area.