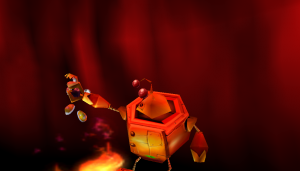 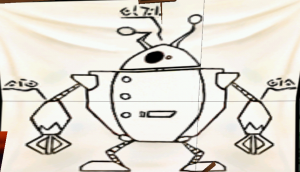 The Grolgoth is a giant robot which Admiral Razorbeard uses in an attempt to put a stop to Rayman at the Crow's Nest. Piloted by Razorbeard, it is also the final boss of Rayman 2 and the Game Boy Advance version of Rayman 3.

At a very late point in Rayman 2, Razorbeard is visited by the General, a character who first appeared in Tonic Trouble, another Ubisoft game which Michel Ancel worked on. The General advertises the Grolgoth and its functions to Razorbeard. The Admiral pictures the contraption crushing Rayman with its deadly grasp, and decides to buy it, giving the General a chest of gold as payment. He then prepares for his attack while Rayman is going through the Prison Ship

The Grolgoth is a large machine comprising of a large, golden-coloured bulk, with articulatable arms and legs, similar to those of the Robo-Pirates. The Grolgoth's hemisphere-shaped head can extend from the body, revealing the entrance to this robotic marvel. Razorbeard jumps in and slides down a rope. At the bottom is located a cockpit, from which Razorbeard controls the machine. For its right hand, it has a cannon, which fires helicopter bombs that Rayman will have to shoot back at the Grolgoth in order to hurt it. The other hand has a hook, which sees no use in the battle. The Grolgoth can also shoot large energy balls from the soles of its feet. According to the General, “It does everything, except the dishes”.

Razorbeard places the Grolgoth at the top of the Buccaneer's mast. He also places Globox, dangling over the edge of the ship from a large elevator's antenna. Before Razorbeard shoots Globox to his doom, Rayman appears through the elevator, shouting that Razorbeard shall leave Globox alone. Razorbeard takes advantage of Rayman's position and shoots down the elevator. As Razorbeard believes himself victorious, Rayman pulls himself back up on the platform. After checking to ensure that Globox is safe, the fight begins. 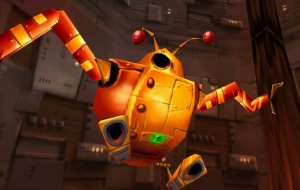 Rayman is saved by Ly, who sends a Silver Lum-like ball of energy to catch Rayman in mid-air, and lower him safely to a small pipe sticking out of the lava, on which a friendly Flying Shell has been stationed. Ly's face appears in Rayman's mind, and she informs him that Polokus has eliminated all of the Robo-Pirates on the land and that the slaves have escaped (with the help of Rayman, seen in the PS1, PS2 and Dreamcast version of the game). Rayman sees that Razorbeard has survived the fall, the Grolgoth hanging between two metal pipes going up the chamber's walls.

Rayman flies on the Flying Shell, both having to find ammo hidden inside the chamber and avoid the homing energy-balls that Razorbeard shoots after him. Rayman must use the ammo to shoot energy-balls at the Grolgoth's hands, causing it to slip and fall into the lava. When the Grolgoth is struggling to get out of the lava, it loses some health; Rayman can damage it more by shooting at it while it's still in the lava. Should Rayman get hit just once during this phase of the battle, his Flying Shell will explode and the battle begins as new from the beginning of Phase 2. When Razorbeard reaches 20% health, he will climb up to the top of the chamber and temporarily raise the level of lava. This can happen several times. When Razorbeard's health reaches 0%, the Grolgoth stalls and falls into the lava. Razorbeard crawls out, dragging an escape pod with him. Before abandoning the Buccaneer, he says: “I've saved one last little surprise for you”, and presses a button on a remote-control device, triggering the Grolgoth's self-destruct mechanism. Razorbeard in his escape pod flies straight up the mast of the ship, through the Crow's Nest and to safety. The Grolgoth detonates, blowing the Buccaneer to pieces and apparently killing Rayman. Razorbeard continues flying upwards until he reaches space.

In the PC and PS2 versions of Rayman 2, there is one minor continuity error regarding Phase 2: the location is too small. In the cutscene, the place was gigantic, and the Grolgoth was very big as well. Both Rayman and the Flying Shell were small enough to stand on the sticking-out pipe. After the beginning of the battle, this same pipe is even smaller (in width) than Rayman, and the Grolgoth is suddenly half the size as in the cutscene. In the cutscene that plays after defeating the Grolgoth, everything is back to its original size again.

In Rayman Revolution, there is another error: in the cutscenes, the Flying Shell is a grey colour and looks like the Flying Shell from the Prison Ship level. During the battle, it is yellow, like the common Walking Shells.