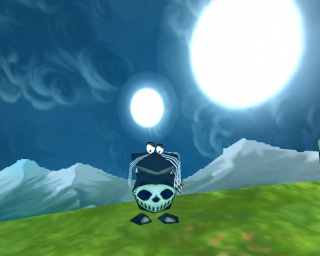 Hardrox is a baby Globox and as such is one of Globox and Uglette's 650 children. He is one of the eight playable babies that appear in the Globox Disc minigame, which can be played in both Rayman Revolution and the Sega Dreamcast version of Rayman 2. In the former game, he also acts as referee in the Baby Football minigame, as well as the match outside Globox's House. However, when Globox is captured and the other babies are crying, Hardrox is nowhere to be seen. In the latter game, he can also be seen in Globox Village, the location from which the Globox Disc minigame is accessed.

As his name, possibly derived from the music genre 'hard rock', suggests, Hardrox is a black-coloured baby with a white skull pattern on his belly, and his head is covered in thin strands of black hair. By entering a secret code in Baby Football (tapping L2, R2, L2, R2, L2, R2, all while holding L1 and R1), the name "Steve" appears over Hardrox's head.