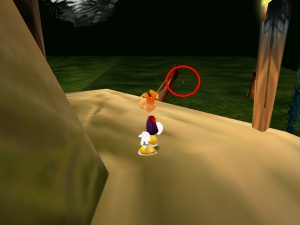 He can tell whether or not an individual is greedy, so he rewards Rayman with the Elixir of Life for refusing to take the tempting treasure. In all versions of Rayman 2 (excluding the Playstation version), the player gets to choose whether (s)he wants the treasure or not, and in choosing it, Rayman is cast to a deserted island surrounded by the Gold, noticeably obese, resulting in 'the end of the game'.

Jano appears again in the GameBoy Advance version of Rayman 3, where he is the boss of the Haunted Dreams world.