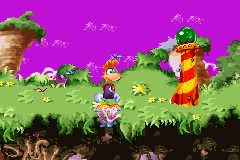 Rayman reaching a lightpost at the end of a phase.

A lightpost is an object found in the Game Boy Advance and Nokia N-GAGE versions of Rayman 3 and the mobile phone version of Rayman 3. In appearance it is a pole wrapped in a striped red-and-yellow curtain and topped with a green glass sphere. Like the exit signs in the original Rayman, they mark the very end of a phase within a level. Touching a lightpost transports Rayman to the beginning of the following stage, or return him to the hub level if the current level has been completed. A lightpost also marks the end of each hub world – these lightposts are usually guarded by Teensies who will not allow Rayman to reach it until he has visited every level within that world, with the exception of optional bonus levels. 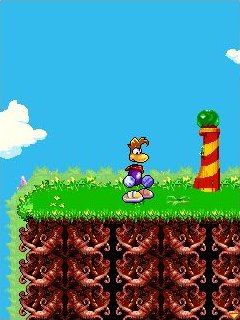 A lightpost in the mobile phone version of Rayman 3.