This article is about the skins in the UbiArt games. For the skins in Rayman M and Rayman Raving Rabbids, see Skin.

The logo as it appears in the Main Gallery.

What follows is a complete list of heroes and costumes which appear as playable characters in Rayman Origins, Rayman Jungle Run, Rayman Legends, Rayman Fiesta Run and Rayman Adventures. 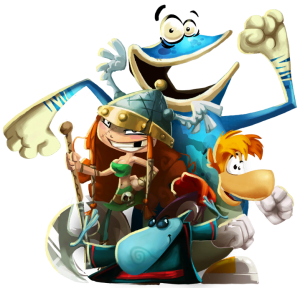 The four characters which appear in Rayman Legends.

The heroes serve has alternative skins for the player to use for the games four characters Rayman, Globox, Teensie and Barbara. Each hero has a unique appearance and has a backstory slightly hinted by the Bubble Dreamer's comments at the Snoring Tree in Origins. Each hero plays similarly to the others, although there are some slight changes between characters. As an example, Globox as a higher attack range.

In Origins new characters are unlocked in bubbles by collecting a certain number of Electoons indicated by Murfy at the Snoring Tree. After beating the Land of the Livid Dead, several players are able to choose the same character, and play using the same skin. This is however already there as default in Legends where most heroes by collecting Lums. Some do however require a sufficient amount of freed Teensies or the beating of a set level in order to be unlocked. Other skins can only be unlocked through limited promotions, like pre-orders or in-game events.

In Jungle Run there are only three more heroes, all of which are unlocked by purchasing the character pack. This comes for free in the Windows version. In Fiesta Run, heroes have to be unlocked on the map by freeing Teensies before being purchased for Lums in the shop. In Adventures heroes are purchased using gems. Some heroes are however exclusive to packs and events. 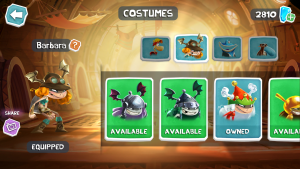 The costume shop in Rayman Adventures
Retrieved from "https://raymanpc.com/wiki/script-en/index.php?title=List_of_heroes_and_costumes_in_UbiArt_games&oldid=70910"
Categories: