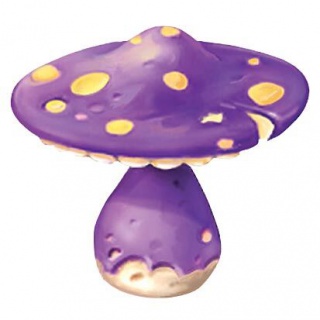 A typical mushroom (from Rayman 2).

Mushrooms are a type of fungus found throughout the Glade of Dreams. Mushrooms are extremely common; different varieties are found in almost every Rayman game.

In the original Rayman game, two types of mushroom can be found in the Dream Forest. One type has a white stem with a bright-red cap covered in white speckles; the other type is the same, but has a cap which is completely bright-yellow. These two varieties of mushrooms are first encountered in the first phase of Pink Plant Woods, the very first level of the Rayman series, and can also be found throughout the subsequent levels of the Dream Forest. They are occasionally found alone, but usually they occur in small groups of two to four. These mushrooms always bounce up and down animatedly; when four red mushrooms occur in a group, they will bounce one on top of the other to form a small tower of mushrooms before toppling and repeating the process. Large growths which resemble a mixture of tree and mushroom also appear in the Dream Forest as scenery; some are alive and brightly-coloured, while some are no more than rotting trunks.

In Rayman 2, two types of mushroom can be found in the Woods of Light. These mushrooms are similar to those found in the original Rayman game, except that they are purple and yellow instead of red and yellow. Like the ones from the previous game, they occur in small groups, they hop up and down animatedly, and they often hop on top of each other to form small mushroom towers before collapsing. This level – the first in the game – also contains other deliberate references to the previous title, such as the presence of mosquitoes. These purple and yellow mushrooms also appear in the next level, the Fairy Glade, along with a large, pink, bouncy mushroom which Rayman can use as a trampoline to reach an overhanging roof of lianas.

In Rayman Revolution, a small yellow mushroom can be found in the Fairy Glade. In order to make the mushroom grow, Rayman must first acquire the Rain Mask from the baby Globoxes in the Pirate Mines, allowing him to perform a Rain Dance. When Rayman approaches the fully-grown mushroom, the words ‘Eat Me!’ appear above it. If Rayman eats the mushroom, he shrinks as though he had touched a Flying Blue Elf, allowing him to pass through a small hole in a wall and find a cage which he can break to free a Familiar Spirit. When he returns, he can eat another mushroom to grow back to normal size. This is a reference to Alice's Adventures in Wonderland – at one point in the story, the protagonist finds a cake labelled ‘Eat Me’ and a drink labelled ‘Drink Me’; the cake causes her to grow, while the drink causes her to shrink, allowing her to go through a small passageway. At a later point, she finds a magical mushroom; eating from one side of it will cause her to shrink, while eating from the other side will cause her to grow.

Mushrooms make an appearance in the Game Boy Color versions of Rayman and Rayman 2. In Rayman 2 Forever, they can be used to bounce up and reach new heights, similarly to Rayman 2.

In Rayman 3, many different types of mushrooms can be found in the Fairy Council – which is also the first level of the game, and, like the Woods of Light, contains many references to the previous title, including the brief return of multiple characters and creatures from Rayman 2, as well as direct, fourth-wall-breaking mentions of it. The mushrooms here are yellow, red or pink in colour. They are much larger than those found in the previous games; many of these mushrooms can be used as platforms, some releasing clouds of spores when Rayman steps on them. None of them move in the same way as the mushrooms from the previous games. Some of the red and yellow mushrooms here grow directly out of trees or walls. At a later point in the game, in the Bog of Murk, Rayman encounters another type of mushroom; these mushrooms grow in the swamp-water, sometimes with nothing but their caps emerging from its surface. They can also be used as platforms.

A special type of mushroom known as a meadowscrew appears. These wrinkly mushrooms have screw-shaped stalks; when Rayman's telescopic fist has been upgraded with the Vortex power-up, he can use it to spin meadowscrews, earning points while driving them deeply into the ground so that they can be used as platforms.

Also in Rayman 3, tiny mushroom enemies known as Podocrocks appear. They are encountered in the Fairy Council and the Land of the Livid Dead. Podocrocks gather together and form small groups, and harm Rayman if he touches them. Each punch to a Podocrock group kills one of its members; defeating an entire group requires multiple hits.

Mushrooms growing in a level of the Forgotten Forests.

Mushrooms appear in several levels of the Forgotten Forests as part of the scenery.

A yellow mushroom as part of the scenery.

Mushrooms appear in several levels as part of the scenery.

A champibumper, as seen in Rayman Origins.

In Rayman Origins, a wide variation of mushrooms can be seen at the Jibberish Jungle and the Ticklish Temples as part of the environment; however, the most notable are the returning group of mushrooms (known as nenuphars) from the original Rayman game and Rayman 2. This group, formed by a big mushroom and various smaller mushrooms, keeps static for a while, then they start to bounce one on top of each other to form a small tower of mushrooms. They wobble for a while until the tower finally collapses and all of the mushrooms return to their original position.

A more important type of mushrooms appears in-game. These mushrooms refereed to as champibumpers push Rayman to another platform (usually hidden in the background) when he touches them. They are usually cyan-coloured and have a yellow star on the top.

In an early version of the game, a mushroom-themed level was intended to make an appearance. This level acted as the fortress of the Soldiers, an evil clan of ants which also was scrapped. However, the loading screen of the Ticklish Temples has several giant mushrooms and a dark environment, and appears to be a reference to the scrapped level.

Large mushrooms in the background of a level in Potpourri.

The same mushrooms as from Rayman Origins appear in the game's spin-off, Rayman Jungle Run.

A funneled shape mushroom, as it appears in Rayman Legends.

In Rayman Legends, a new type of mushroom is introduced. These mushrooms have a funneled shape akin to that of a rocket. When a player hits these mushrooms, they shoot up, and finally explode producing brightful colours, akin to fireworks. The explosions are used to repel dark creatures, akin to how the gongs repelled swarms of insects in the Desert of Dijiridoos and the Grumbling Grottos in Rayman Origins.