Difference between revisions of "Polokus"

He is the spirit of the world, the creator of all that is and will be... His power is such that his dreams can become reality... Long, long ago he left this world, and only by reuniting the four magical masks can he be brought back...
—Manual, Rayman 2: The Great Escape

The creator of the dream world and all who live in it. Bubble Dreamer is the Supreme Being who dreams the world and all of its marvelous creatures into existence with His every sleep. He is a sensitive being; an artist (and unabashed hedonist) who is emotionally attached to his creations. His feelings have a direct effect on the world, and even one bad dream can unsettle its fragile balance! The magic people believe Bubble Dreamer keeps to His sacred resting grounds. But we know better: this fun­loving, super­being can’t resist living among his creations to laugh, play, and overindulge… and His creatures are much like him.
—Offical site, Rayman Origins

Polokus, also known as the Bubble Dreamer, is a divine character who appears in Rayman 2: The Great Escape and Rayman Origins. Said to be the spirit of the world, he created the Glade of Dreams and its inhabitants through the sheer power of his dreams. Unfortunately, his nightmares also have a life of their own: during the First Bad Dream, he spawned Jano, introducing much evil into the Glade.

In Rayman 2, he appears as a pale, squat, somewhat amphibious creature with long, spindly arms, He stands atop a stone column designed as a receptacle for the four Masks of Polokus, and wears a pair of blue-green trousers with a golden buckle and a magician's hat identical to Jano's. This may be Polokus's true form.

In Rayman Origins, Polokus is known as the Bubble Dreamer. He wears a pair of sunglasses, no longer wears his trousers, and has a long ginger beard, similar to the Fakirs'. He has a bubble-blowing pipe, which he uses to convert his dreams to reality while he's asleep. During earlier development of Rayman Origins, Polokus was revealed to be a shape-shifter, but it's unknown if this idea was scrapped as Polokus is never seen changing his form. Early artwork of the game depicts the Bubble Dreamer as a rock, a giant tree and his most recent beardy appearance.

Polokus himself was created by the Yellow, Red, Purple and Blue Lums. His power was such that his smallest dream or desire became reality. He is a god, but his connection with other gods such as the Leptys is largely unknown.

Polokus created the Glade of Dreams, then decided to use his powers to bring people to his world. First, he created the fairies, who are his emissaries. The fairies were the creators of a fifth type of Lum, the Silver Lums; these are what give Rayman his powers. Next, Polokus created the Teensies, whose purpose is to unveil all the secret passages of the world. The Teensies constructed the Hall of Doors, a magic place where all paths eventually come together. Next, he created simpler creatures, beginning with Clark the Giant, whose strength Polokus used to help carve the landscape. Next, Polokus created Globox and his family, drawing upon his sense of humour for inspiration. Polokus then created a multitude of fantastic creatures, such as Murfy and Eig. 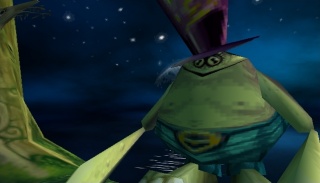 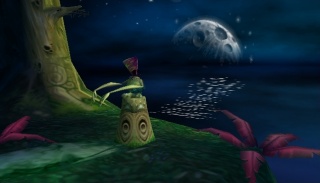 The place where Polokus sleeps

Having created all the creatures of the world, one task remained: creating time. In order to do this, Polokus went into a deep sleep to have a meeting with all the other gods of all the other worlds so that they could dream up the future together, a task which Polokus was unable to perform himself. Before doing this, Polokus created four masks that, when reunited, would awaken Polokus in case there was trouble. To avoid anyone waking him needlessly, he hid them in four Sanctuaries and placed Guardians there to protect them, each one with a weakness. This was done in such a way that only one being could get these masks: Rayman. Before going to sleep, Polokus explained this situation to the fairies, that they might aid Rayman when the time came to awaken him.

It is when Razorbeard and his Robo-Pirate army attack in Rayman 2: The Great Escape that Rayman must collect the four masks. After every time Rayman collects a mask, he meets Polokus in his dreams. Polokus takes the mask and urges Rayman to find the rest. After Rayman finds them all, Polokus explains that Rayman will have to fight Razorbeard on the Buccaneer, because on the earth, Polokus is unbeatable but when in the air, he is as vulnerable as a newborn. Then he gives Rayman maximum energy and teleports him to the Prison Ship. Polokus then eliminates all the Robo-Pirates infesting the planet. s. Trying to fight them was useless, and shortly, Rayman, Globox, the teensies and the Bubble Dreamer were caught in cages at the [[Snoring T At the end of Rayman 2, Polokus joins the other characters at Rayman's funeral, looking very sad. Then Rayman arrives, alive and well, and everyone, including Polokus, celebrates.

Polokus does not appear in Rayman 3: Hoodlum Havoc, and his absence is not explained. His next appearance is in Rayman Origins, where he is now known as the Bubble Dreamer. He has become a relaxed, jolly, whimsical being with a more childish attitude, and now dwells among his people. His appearance has changed: while still a fat, pale, amphibious creature, he no longer wears clothes, and he now has a long orange beard. He has become good friends with Rayman, Globox, the Teensies and other characters. A magical instrument he uses to bring his dreams to life is seen for the first time: a wooden bubble-blowing pipe. Bubbles are introduced as a major motif which recurs throughout the game. It is revealed that the Electoons are the stuff of Polokus's dreams and the substance of his world.

One day, the Bubble Dreamer and his creations are sleeping at the Snoring Tree, their sound of their snoring annoys an irritable Granny who dwells deep in the subterranean Land of the Livid Dead. She sends an army of Darktoons, Psychlops and other nighmare creatures to invade the Glade of Dreams and put a stop to the heroes' snoring. The creatures capture Rayman and his friends, imprisoning them in cages. Rayman soon escapes and pulls the Bubble Dreamer's beard, causing him to destroy his cage and free himself. Murfy appears, telling the heroes that in order to restore the Bubble Dreamer's memories (to make more playable characters appear), they should collect Electoons. The Bubble Dreamer spends the rest of the game levitating inside the Snoring Tree, sometimes acting crazy, pulling his left eye, clucking like a chicken and pulling his head off. Characters can pull his beard to make him laugh and cause him to give a brief, whimsical description of the player's current character.

In the description given on the manual of the game, it is revealed that Polokus accidentally created Jano during his First Bad Dream. Jano then started creating Darktoons, the negative equivalent of Electoons and the stuff of nightmares.