A detailed view of a popolopoï in Rayman 2 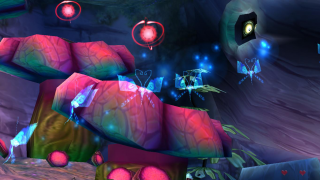 Popolopoï in the Fairy Council in Rayman 3: Hoodlum Havoc

Popolopoï make a return Rayman Origins. They can be seen fluttering around in several levels of the Jibberish Jungle and the Ticklish Temples; a group of Popolopoï can be seen hiding on the loading screen on the same levels, and if players run into them, they temporaly fly around. During the first trailer, some of them can be seen flying away from the stone circle right before Rayman is created.