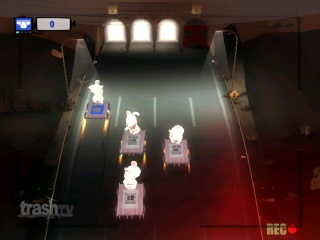 This article is about the Wii version of the minigame. For the DS version, see Prison Fake (DS).

Prison Fake is a minigame from the console version of Rayman Raving Rabbids TV Party. It is found as one of seven minigames in the Trash TV section of the TV guide.

In this minigame, four Rabbids have escaped from prison, one of each up to four players can control in multiplayer mode. They board on a railcar each and try to escape by racing in each of four lanes of a motorway. The aim of the game is to keep on the road, by going through an open tunnel that is indicated by a bright white light. Some of the tunnels are blocked off, and any player that crashes into one will slow down. Slowing down also occurs when the Rabbids bump into each other as they try to reach the correct lane.

The first player to each the end wins the game.