It was released for the Nintendo Wii and the Nintendo DS in November 2009, five months after it was announced and confirmed for release. 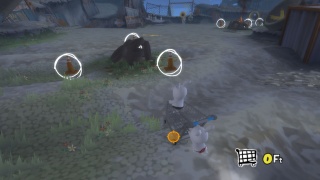 The Rabbids go searching for stuff.

On the outskirts of a bustling city set in Earth, a group of Rabbids hang around in a junkyard, bored of partying, and want to go home. The problem is, they don't even know where they come from, so they cast the moon as their new home. They notice the piles of junk around them, and decide that by making one pile bigger with even more junk, they could reach it. Two Rabbids then take a shopping trolley and search around for things to toss onto the pile, before setting off to the city to look for more junk. If the last level is beaten, the game shows the ending, in which the Rabbid who stands on a globe to see how far the moon is attempts to hug the moon, but realizes that they do not have enough stuff. Then, bombs appear on the pile, in which the pile blows up, sending the stuff back to the humans. The bright side: When the bombs blew up, the Rabbids made it to the moon. The game then shows the credits.

Typically, the player controls two Rabbids - with a third one at the ready for use as a cannonball Rabbid - one sits inside a shopping trolley, while the other pushes it. The aim of the game is to roam around human places such as malls, hospitals and other such places, and collect stuff for their moon pile, some of which is obtained by ramming the trolley into objects and even humans. In each level, there are 400 pieces of stuff to collect, as well as the XL object which is worth 600 points, letting the player score up to 1000 points. Additionally, up to four presents can be obtained throughout the level depending on how much stuff is collected.

Unfortunately the Rabbids are prone to damage thanks to enemies such as the Verminators and the Vermi-dogs, as well as other dangerous objects. Their health is represented as light bulbs, and in the beginning of the game, they start with three. More light bulbs can be added as the player progresses through the game. While the game has no lives system (therefore no game over), losing all the light bulbs will result in the Rabbids being set back to an automated checkpoint, and all of the stuff they have collected is lost, unless they find a Collector Rabbid, which stores all collected stuff inside its tuba.

While collecting all 400 pieces of stuff is not necessary (though the player will be ranked) to complete the level, getting the XL object is mandatory. In fact, a few of these objects can prove to be useful, especially bubble beds. At the end of each level, the Rabbids will push everything they have as well as themselves down a toilet, taking them back to their base at the city dump.

The setting is the city dump where the Rabbids live and the city, and other settings. At the dump, the player can check how much junk is needed to get to the moon. At Center City, the player has to follow yellow paint to get to the new area for more stuff. Along the way, there are enemies to fight and stuff to collect.

Bwaaaah! Attack: Shake the Wii Remote. This can break certain objects, stun enemies, and strip humans of their clothes.

Accelerating: Hold A button down.

Super Boost: Hold A button down, turn, when blue sparks are coming from the wheels, press B button. This can knock down piles of crates, strip certain enemies, and get over obstacles by using a springboard.

Center City is the main hub of the game, in which the Rabbids search around for new stuff places by following specific arrows that lead them to a new place. It is first accessed when the player completes "Shop Till You Drop", and each time he or she loads the game from then on, the game will begin here. Reminiscent to Rayman Revolution, stuff can still be picked up and enemies can still be fought there. However, XL stuff (eg. cows, bubble bed etc) cannot be found here.

At the beginning of the game, you can download the Rabbids Channel on the Wii. Each week on the channel, there is a new theme for your Rabbid. Color, paint, and give your Rabbid costumes for the voting. You can also go on http://rabbids.com/izw to see the best Rabbids. At the end of your customization, there is an icon for you to send your Rabbid to the website listed above.

This is a utility which takes place inside a virtual Nintendo Wii Remote. The player begins this by choosing one Rabbid and sucking him inside, ready for him to be customized and also tossed around if the player shakes the Remote around. It is unlocked once the player completes the mission ==In the Nick of Time==.

The Tools are unlockable utilities that are used to disfigure the chosen Rabbid. There are six to choose from.

In this utility, the player gets to paint their Rabbid any colour and pattern they like with the drawing and painting tools provided. Also provided is a collection of stamps, most of which are given as unlockable gifts.

A selection of random objects that the Rabbids have collected can be worn in this utility.

Most of the game's original soundtrack was performed by French-Romanian gypsy brass band Fanfare Vagabontu, most of which is based on traditional Romanian folk music. It can be purchased as an OST from sites that provide MP3 downloads such as iTunes and Amazon.

As well as the game's original soundtrack, several licensed songs play throughout levels from time to time.

Rabbids Go Home was released on PC in select countries in Europe, notable France (in which it was published by Mindscape) and Russia. Much of the content from the original Wii version is absent from this version, such as the In Ze Remote features and the Centre City. Only 16 levels are present in the game.