Difference between revisions of "Rabbids Travel in Time 3D"

Rabbids Travel in Time 3D (known as Rabbids 3D in Europe) is a game in the Raving Rabbids series for the Nintendo 3DS. It was released on the 1st April 2011, a week after the 3DS lauched in Europe, while it was released in North America on the 10th April 2011; several months after the release of its Wii counterpart, Raving Rabbids Travel in Time. Unlike said version, this game is a side-scrolling platform game rather than a minigame compilation, and is the first in the entire Raving Rabbids series that is such.

The player controls a single Rabbid, even unlike the Wii version of Rabbids Go Home in which the player controlled two Rabbids riding a shopping trolley. This lone Rabbid is teleported into each level with the Time Washing Machine, and has to find another one at the end of the level, while collecting coins and rubber ducks.

At the top screen, the Rabbid's health is represented by at least four toilet paper rolls, and also unlike Rabbids Go Home, the player has limited lives which are represented by an icon of the Rabbid's face. The bottom screen shows a crudely drawn map of the entire current level, showing the Rabbid's current position, some checkpoints, and the Time Washing Machine at the end. This also shows an icon representing a certain objective the Rabbid has to accomplish, such as eliminating a certain number of enemy Rabbids.

Along the way, the Rabbid encounters enemy Rabbids, which often carry a piece of costume that the player can customise the Rabbid with. There are also several other obstacles that cause damage. 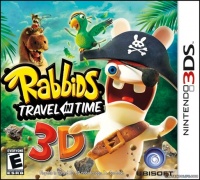 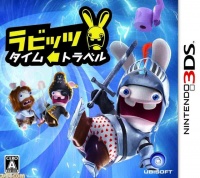