Early in its development, Rayman 2 was intended to be a 2D game, which would have been very similar to the original Rayman in terms of graphics and gameplay. This 2D game would have been released for the Sega Saturn and Sony PlayStation.

The game would have had a much stronger similarity to the original game than the final version did. The art style would have remained very similar to that of the first game, as would the gameplay, with a few notable additions. The mechanical gameplay was to be more accessible and less difficult than that of the original Rayman game, but it was also to be more cerebral; puzzles would have taken on a larger role, as can be seen in the playable level which was included with the PlayStation version of the final game.

According to one magazine article, the game was due for release in the late Autumn of 1996. It is unknown exactly how near the game was to completion, but it seems that its music had not yet been composed when the game was scrapped. However, the magazine's article on the game stated that ‘it's already in a fairly advanced state – expect to see a preview next month’.

When the developers saw Naughty Dog's original Crash Bandicoot game at the 1996 Electronic Entertainment Expo, they became aware of the new gameplay possibilities offered by the 3D platforming genre. This led to their cancellation of the sidescrolling Rayman 2 prototype in favour of the final 3D game.

The plot of the cancelled game was similar to that of the final Rayman 2. In the prototype game, Mr Dark has been defeated and has vanished from Rayman's island. Then, evil robotic invaders from space arrive, and Rayman has to defeat these invaders while rescuing his friends from their imprisonment – one character who was imprisoned by these robots was Betilla the Fairy. The robots planned to convert the entire planet into a cold ball of metal. A character named the Chief, similar in design to the General, would have been involved in the game's story, and probably would have played a much larger role than that of the General in the final version. It has been speculated that he was the game's villain, and was replaced by Razorbeard in the final game. All of the characters would have been limbless. Betilla, and possibly other characters from the original Rayman would have returned, and new friends would also have appeared to aid Rayman.

Error creating thumbnail: Unable to save thumbnail to destination
An early screenshot showing Rayman on an unnamed robotic dinosaur.

Rayman would have started using mechanical tools and devices. These would have included a plunger vehicle (possible something similar to the plunger gun in Rayman Raving Rabbids), a hook, a laser pistol, and a ‘deviant’ – a device used to make Rayman's telescopic fist rebound. Rayman would also have been able to mount and ride certain vehicles and creatures, including a robot dinosaur (this idea was recycled in the cancelled Rayman 4).

One new platforming element was the addition of a 'cowardly' platform, which would shrink away from Rayman in fear should he approach it. Punching the platform would create a sparkling connection between it and Rayman, which would prevent it from escaping while the connection endured. This new power was to be called the platform fist. Very similar-looking (though otherwise completely different) platforms were found in the Game Boy Color version of Rayman. Perhaps the most significant alteration to the gameplay was that the levels were now two-layered; there was both a background and foreground. Enemies in the background could fire projectiles at Rayman while he was in the foreground, Rayman would be able to teleport himself between layers by activating a device that resembled a shower with a toilet-handle attached. This background–foreground system was quite similar to the one found in the games Oddworld: Abe's Oddysee and Oddworld: Abe's Exoddus.

Another new addition to the game were floating, purple bombs. These explosives could be moved around the area by Rayman's punches, but would detonate upon contact with Rayman or each other.

Another new object was a small floating box with a hand protruding from it; some of these boxes floated stationary, but others moved horizontally or vertically. When Rayman punched the hand, his fist would bounce off it; this would allow Rayman's fist to reach otherwise unaccessible spots, such as an out-of-the-way life statue, or let him his a floating bomb from another angle. It was even possible for the fist to be bounced around between multiple floating hands.

Tings would have appeared in the game; unlike the sparkling, blue Tings of the original game, these Tings would have been silvery and metallic, and reflected their surroundings, like small convex mirrors. Life statues and exit signs would also have returned. Red flying rings would have returned, although, strangely, they functioned the same as purple ones, in that they did not sink when Rayman grappled them.

Several of the game's enemies have been revealed through the playable level and various magazine and promotional video previews. The antagonists of the game were robot invaders from space (similar to Robo-Pirates in the final version). They intended to imprison the inhabitants of Rayman's island and turn the planet into a cold ball of metal. Like the game's other characters, they would all have been limbless. The game would have featured a significantly higher number of enemies than the original game. 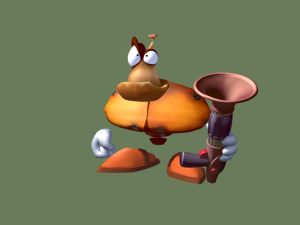 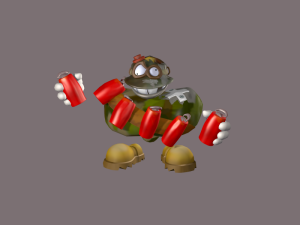 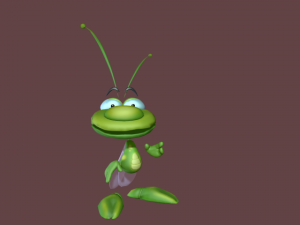 Several sound file descriptions are leftover for this enemy:

The Chief, as seen in a promotional video. 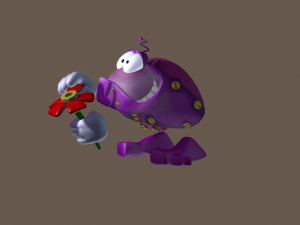 The five images on the top row are screenshots from the same level which is playable in the final PlayStation version of the 3D game. The images on the bottom row include, form left to right: Rayman sneaking up on the Chief and other enemies; the Hunter clutching a cage and a gun; and CHAINSAW XR28 stopping to look at a flower.

In the final 3D Sony PlayStation version of Rayman 2, the player can unlock a single level from the canceled 2D version of Rayman 2. This is done by collecting at least 90% of the Yellow Lums, then completing the Crow's Nest level. Since the PlayStation version of Rayman 2 has only 800 Yellow Lums to collect, the player only needs to collect 720 of them in order to access the level. The level takes place in a grassy environment with strange rock formations in the background, in addition to a cloudy, purple sky. Music from the Walk of Life level plays in the background.

An inspection of the files on the disc of the PlayStation version of Rayman 2 reveals a file called RAY.INF, which contains only the following French text:

Its exact meaning is unknown; however, Vincent Greco was the lead programmer on the original Rayman game, and went on to work on Rayman M and Rayman 3. Judging by the appearance of his name in its files, it would seem that he was also involved in the production of this prototype.

The two closest layers are the playable maps.

The two furthest layers are the background layers. Although these are actual layers where objects can be, there is no collision and the only object present is the waterfall.

In the October 1999 issue of MausKlick magazine, there is a poster of "Rayman sneaking up on the General and his Robo-Pirate servants." It is unknown why a poster promoting the original Rayman 2 is present. However, this could mean the prototype was in further development then previously thought. During the summer of 1996, more magazines also promoted the game.