Rayman Designer, also known as Rayman's World in Germany and as Rayman Gold in the bundle with the same name, is a PC sequel to the original Rayman game, which features 24 new levels called Rayman's New Levels, and a program called Mapper that enables players to create their own levels, or play levels imported from others. Levels could previously be shared to the Ubisoft server from where users could also download other user created levels. This service is however no longer active and the only way to import levels is by getting the level file and importing it using the Mapper program. 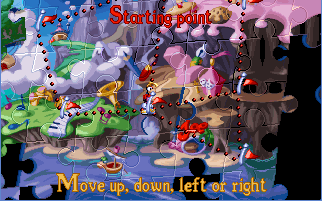 Gameplay in the 24 official levels, as well as new ones created by fans, occurs in the same six worlds as the original Rayman game, but does not involve finding cages and freeing the Electoons inside. Instead, Rayman must collect all of the blue Tings to make the exit sign appear, a task that also involves collecting Tings of various other colours to make other items appear or disappear (most often platforms or blocking sprites, respectively). The maximum amount of Tings in a level is 100, which is always the amount in the 24 new levels. Getting 100 Tings will no longer award Rayman with a new life, making finding the life statues the only way to earn more lives. Rayman starts with 5 lives in each world.

Each level included a timer which records the time it takes to reach the exit sign. The record time is displayed on the level selection screen for the 24 new levels, and although it is not shown for any user created levels, it is still saved. If a previous record is beaten, Rayman will make a victory dance upon reaching the exit sign instead of his usual "yeah".

The 24 levels have been known to be of more difficulty than the levels in the original Rayman game. It has been recommended for newcomers to the Rayman series, to play the original game, before attempting to complete the 24 new levels.[1] 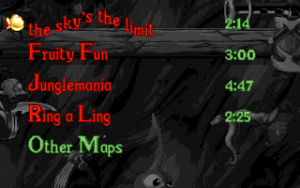 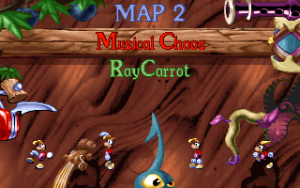 The four Rayman sprites below show which powers can be used in the level.

User created maps can be played from the "Other Maps" option on the level selection screen. A level which has been imported to the Mapper is shown as an "original map" and can not be edited or removed. Any other level can be edited by entering the level and pressing "E" to enter the editor. The maps themselves are always first created in the Mapper.

The Mapper program is an executable program which is where the maps are created, exported and imported and previously also shared to the Ubisoft server. To create a level, the user has to choose the dimensions of the map by selecting an example. The sizes are as follows:

Once the dimensions have been chosen, the user may fill in basic information, such as the title, description and which powers that can be used. The difficulty setting determines the amount of lives the player gets to start off with. If it is set to easy the player starts with 1 life, if it is medium the player starts with 3 lives and if it is hard the player starts with 5. Once that is done, the user can start adding blocks (stationary level objects) by copying them from the world template map. Each block piece comes equipped with a "type" which determines its function. Water blocks for example have the water type, which makes Rayman drown upon touching them. The types can however be changed manually, although it is not recommended as it leaves the player without a visual cue of the blocks functions.

The next step in creating a level is by going to the event editor in Rayman Designer. The event editor is triggered by pressing the "E" key once in the level and exited by pressing the "A" key. The event editor lets the user place events, such as clouds, enemies and Tings, on the map. There is an option to change the block types, though the interface works better in the Mapper program. The user may also chose the players starting position and the location of the exit sign. The events available differs between worlds. For example, Bad Rayman can only be placed in the Cake world.

Keys used in the Editor

Keys used in the game