An image of him can be obtained in the gallery. It calls him 'Dark Rayman' and 'Rayman Alter Ego'. 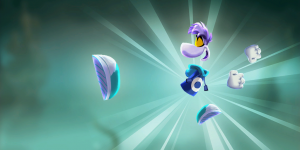