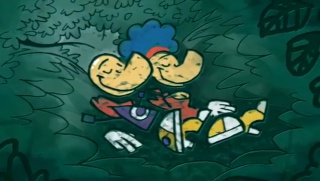 Raynette[1] is a character who seems to have been the wife or girlfriend of Rayman. She never makes a physical appearance in the series, and is seen only in one of the two backstory mosaics unlocked by collecting relics in the PlayStation Vita version of Rayman Origins, as well as in The Art of Rayman Origins. The mosaic reveals an event that occurred in the distant past, before the events of the original Rayman game. Rayman is shown completely bald, living happily with Raynette. She appears to have a strange fixation on Rayman's baldness, and is shown kissing the top of his bald head. One night, as Rayman sleeps peacefully with Raynette on the forest floor, a colony of parasitic blonde hair creatures, named Mini-Villi, find Rayman and fuse themselves to his scalp. When Raynette awakens, she is horrified to find her husband with a full head of hair, and produces a large pair of scissors. The hairs, fearing for their lives, begin to pull on Rayman's head, dragging him over the edge of a cliff. As Rayman falls, they reveal their ability to act as a helicopter, flying him to safety. Raynette is never seen or mentioned again.