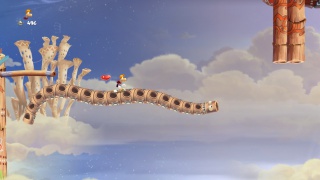 A serpent flute in Skyward Sonata.

Serpent flutes[1] are creatures which appear in Rayman Origins and Rayman Legends.

They live in the Desert of Dijiridoos. They resemble snakes, but their bodies are composed of wooden flute segments rather than flesh. The only hint that they are living creatures are their eyes.

Serpent flutes can often be found soaring through the air by unknown means. The heroes can jump onto their backs and use them as platforms.

In Rayman Legends, apart the Desert of Dijiridoos, the serpent flutes also appear in a level of the Fiesta de los Muertos, Mariachi Madness, and some levels invaded by the Mariachis. Their head and the end of their "tail" are green.