Difference between revisions of "Skin"

Skins are unlocked in Rayman M/Arena/Rush. Most of the characters earning them in Rayman M, but all the characters get a skin in Rayman Arena and Rayman Origins. Each character unlocks up to three skins in Rayman M, but in Rayman Arena, all competitors have four skins each, except for Dark Globox, Rayman, Tily, Razorbeard and Razorwife, who only get one. Each skin (but Rayman's) changes the beat for the character's theme to what it is most suited to (e.g., Globox has his strawberry skin and is racing in the Extreme League. The beat for the Extreme League racing is fast, and the beat for the Advanced League is light and watery. Globox's skin will change the beat from the Extreme League to the Advanced League.). But if it is in its League, it will change to the Beginner League's beat (thumping in the background). The skins do not have this effect on battles. It is unnoticeable, but may be true that the skins in their league make the event slightly easier.

In Rayman Origins, there are 16 playable characters with different skins based on the original animated models of Rayman, Globox and the Teensies. Each character has an unique appearance and a backstory slightly hinted by the Bubble Dreamer's comments at the Snoring Tree, but their movements and animations are the same. As an exception, Globox Rayman and Red Globox appear to be Rayman and Globox themselves, but with a different colour palette. New characters are unlocked in bubbles by collecting a certain number of Electoons indicated by Murfy at the Snoring Tree. After beating the Land of the Livid Dead, players are able to choose the same character, and play using the same skin. 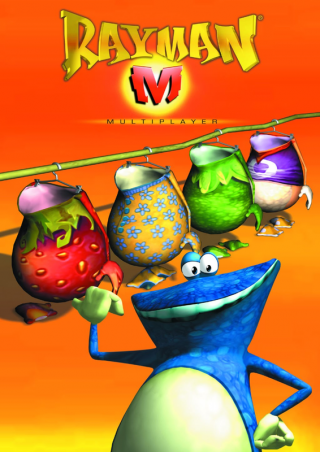 One of Razorbeard's skins is him covered everywhere with very dark navy blue, apart from his buckle, which is gold, and his eyes, which are glowing red. His other skin is all of his clothes are coloured blue and white in stripes, his hat is completely blue, apart from the skull and crossbones which is white. He also has a slight shade of blue on his head.

Globox's Advanced League skin is him having a strawberry colour scheme skin. His Expert League skin is him wearing Rayman's shirt, which doesn't fit him, and Rayman's topaz colour skin. His Extreme League skin leaves on his head and the same colour skin for his body. In Rayman Arena, he has other skins, one which is him having yellow skin all over him, apart from his head, and is blue flowered, and another which is him wearing a white and black striped jacket and pants, a white shirt and a black tie, in an homage to the title character of Tim Burton's film Beetlejuice. One of his beta skins is similar to Superman's outfit. 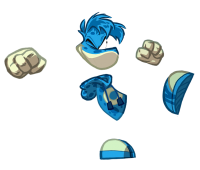 Rayman only has two skins. DarkRay, Rayman's evil clone, and Globox Rayman, who appears to be Rayman himself wearing a Globox skin. Tarayzan was going to be a skin, but was removed from the final game.

Globox has two skins like Rayman, Red Globox, who appears to be Globox himself before turning blue, and Glombrox, an evil Glute and possibly an evil clone of Globox.