Rayman rides through the second Teensie Highway on his Funkyboard

The developers shared some information regarding the Teensie Highways in a 2003 interview with RaymanZone. The platforms Rayman skates across are referred to as ‘staves’. According to the developers, ‘the idea of the staves inspired the graphic designer and the team to create themes. So the first Highway only uses psychedelic elements – big hearts, or peace symbols with disco music. The second one uses more colours, and motifs from the 1980s. These elements are very vivid for the player. He has a good laugh when he lands up in these slightly screwball universes!’ It appears that the Teensie Highways are meant to have a very strong connection with music; like Band Land in the original game, the very platforms Rayman uses here are made of music. The inspiration for the third and final Teensie Highway is not revealed; however, it is notable for including a screenshot from the original Rayman as one of the fleeting background images. 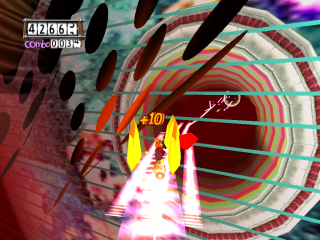