Difference between revisions of "Teensy Queen"

The Teensy Queen is a playable Teensie character who appears in Rayman Origins, Rayman Legends and Rayman Adventures.

The Teensy Queen has short black hair and wears a pink coat, hat and dress. When she pulls on the Bubble Dreamer's beard, he praises her fashion sense and combat abilities. His nicknames for her include Her Royal Teensetteness and Pink Terror. She was the first female Teensy to have appear in the Rayman series, though vague references to them are made in Rayman 3. She is also the only female playable character in Rayman Origins, though Uglette was intended for inclusion at one point. Despite her sex, the Teensy Queen's vocalisations are the same as those of the game's other Teensies. In Rayman Legends, it is revealed that she has a crush on Rayman.

Your royal Teensetteness! How's it going; you Pink Terror you! Last I heard, you were blazing through the desert bubblizing baddies! That bone barrette you last brought back is my favourite! Wack 'em one for me!
—Bubble Dreamer, Rayman Origins

In Rayman Origins she is unlocked once 55 Electoons have been collected.

Here's a girl who has broken many Teensy hearts, but she doesn't care because she only has eyes for her childhood hero: Rayman!
—In-game description, Rayman Legends, Rayman Adventures 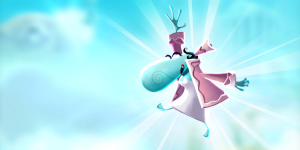 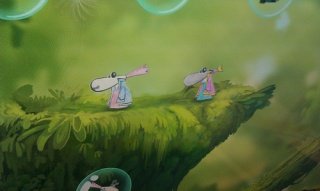 An early version of the female Teensy with her male counterpart.

One piece of artwork for Rayman Origins shows an early version of the Teensy Queen, with white skin, a small golden crown and a light blue undercoat. Standing beside her is a male Teensy with a very similar appearance and clothing; he has the same white skin, and wears a large pink grown, a pink undercoat and a light blue robe, and also sports a thin black moustache. As another member of the Teensy royal family, this character is presumably the husband of the Teensy Queen, or perhaps a close relative. Nothing else is known about him.