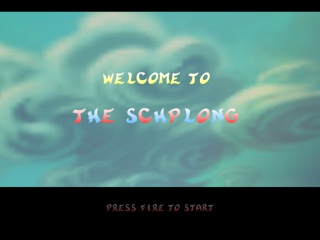 The Title Screen for The Schplong minigame 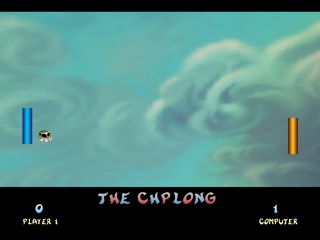 This mini-game is a replica of the famous Pong game

The Schplong's gameplay is almost identical to that of Pong, the early arcade game which it parodies. The player controls a vertical blue bar which hovers at the left side of the screen; it looks like a segment of Rayman's oxygen bar. The opponent of the minigame is a vertical yellow bar which hovers at the right side of the screen; it looks like a segment of Rayman's health bar. The heads-up display features two counters – one labelled ‘Player 1’ and the other labelled ‘Computer’. Above each is a zero. The minigame's name is also displayed near the bottom of the screen, though the ‘S’ removed. The Elixir of Life (a skull containing a green liquid) appears at the beginning of the minigame and flies towards the player’s blue bar. The player must manoeuvre their bar vertically to block the Elixir, causing it to bounce towards the opposing bar. The computer-controlled yellow bar then attempts to block the Elixir, sending it back to the player. Assuming that both bars are successful, the Elixir continues to bounce between them and the horizontal edges of the screen, constantly gathering speed. Eventually one of the bars fails to block the Elixir; this means that the other bar has scored a point, and the respective counter on the heads-up display increases appropriately. When the blue bar scores a point, a happy sound plays, such as Rayman going 'Yeah!' When the yellow bar scores a point, a sad sound is played, such as the sound Rayman makes if he swings on a Purple Lum. The minigame has been completed successfully when the player has successfully scored five points; should they concede five points, they lose the minigame.