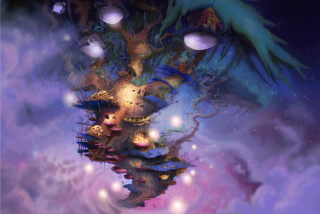 The World-Tree is a location that was originally intended to appear in Phoenix Interactive's Rayman 4. All that is known about it comes from a single piece of artwork that was produced for the game. It appears to be a gigantic tree which reaches high into the heavens, where it is surrounded by stars, clouds and strange lights. The trunk of the tree is surrounded by fungus platforms, which Rayman would presumbly have to climb in the game.

The concept of the World-Tree is taken from the ancient motif of the same name, which appears in many religions and mythologies.

The World-Tree of Rayman 4 may have been the inspiration for the Snoring Tree, the hub level of Rayman Origins.