The team can advance by using wind currents from vents and from the sky by activating the glide power. Some currents might push the characters in the wrong direction. The first Skull Coin of the level can be acquired by dropping down through the last wind current of the area next to the exit.

The team can continue on by using water currents to take them to more wind currents from the sky. The second Skull Coin is surrounded by three orange spiky birds on the second vertical wind current. The players now have to use more of the glide power as there is then a large wind current coming from the bottom of the sky. The first secret area can be found by gliding up between two platforms nearby several rotating vents. Once completed, the heroes must glide through the rest of the wind current to where they will meet several bad birds that blow air at the players. The team can defeat them when they stop blowing air then they can get to the exit. 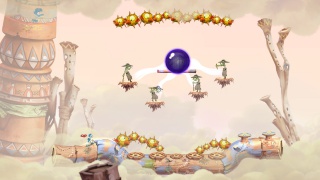 Oddly, Lividstones are the enemies that have to be defeated in order to brake the Electoon cage. Rayman and his friends can activate strong currents to destroy the Lividstones. 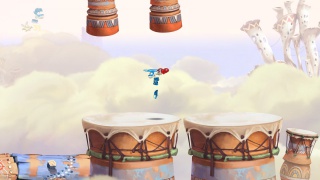 Rayman bouncing on a large bongo.

The team can immediately find the third Skull Coin by body slamming on the first large bongo. After that, they come across short wind currents that stop and then continue. The players will have to be quick in order to get by without falling down. The fourth Skull Coin is in between several spiky birds in the middle of the three disappearing currents. The second secret area can be located by gliding up on the third disappearing current and using the Swingman to get across leading up to the door. Once the Electoons are saved, the team can drop down to the exit. All the team has to do is avoid the continuous rising spiky birds and defeat the lone sleeping bad Red Bird. The cage will then be able to be broken. Now Rayman and his friends must avoid more spiky birds and take advantage of more short wind currents from vents. The fifth Skull Coin of the level can be retrieved by performing a walljump to a narrow platform that has a switch that will create a wind current to get back up. The heroes will continue avoiding the spiky birds and gliding until they reach a platform that leads up to the exit. In this area, the team must glide throughout in order to get to the exit. Along the way, they have to avoid Darkroots that stretch out at different lengths. The sixth Skull Coin can be found by safely getting in between a group of Darkroots. The exit isn't too far away; the team can get there by continuing gliding and then avoiding a few spiky birds. Rayman and his team now need to destroy the four Red Birds flying around the entire area. Once all are defeated, the Electoon cage can be broken, thus ending the level. Then the team poses on a photoboard as the Magician waits to see how many Lums the players collected in the level.