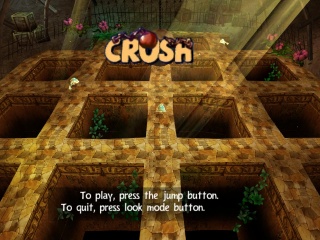 The title screen of Crush.

Bégoniax cast a spell on Razoff's cave. Ever since, the toads have been multiplying. Try to stop the invasion by squashing the toads with the ball and chain.
—In-game description, Rayman 3

Crush is the third of the nine minigames which can be unlocked and played in every version of Rayman 3. It is unlocked by earning 4,000 points.