Demons are enemies which appear in the Nintendo DS version of Rayman Raving Rabbids. There are three types of Demons; regular, big and red. The regular kind drops one star item while the big ones drop two. The red versions only appear in challenge stages. 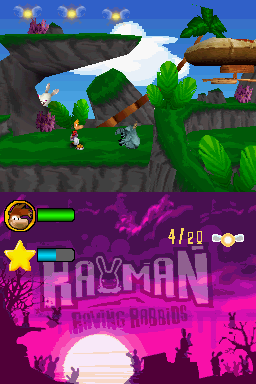 Demons are usually seen walking back and forth, sometimes in and out of the screen, on stationary platforms. They are the first enemies to be encountered in the game and make their first appearance during the tutorial stages on the beach. Colossus also spawns Demons in front of Rayman in the boss battle. Regular and big Demons are grey in color and they only deal damage on contact.