Rayman Raving Rabbids is a portable version of the console game of the same name which was released for the Nintendo DS in 2007. Unlike both the console versions and the Game Boy Advance version, this game uses 3D graphics but plays as a sidescroller throughout the majority of the game. Like the console version there are several minigames which have to be completed to progress.

The game takes usage of the Rayman 2 engine, and several elements are holdovers from the Nintendo DS version of Rayman 2, including the menu fonts, Rayman's model, sounds, textures and animations.

While taking a quiet walk in the forest one day, Rayman is captured by ... Rabbids! They have decided to invade our world and now Rayman is their toy, a tiny gladiator to entertain them.

Rayman's only chance at freedom is to face Rabble Droid. But to do that, he must win enough trophies and fight other champions!

Similar to the console version, Rayman is relaxing in the forest, until the Rabbids, which are invading the planet, capture him and take him away to face the many challenges awaiting him in the Colosseum. Once there he is forced to play through their challenges to earn trophies, which will eventually let him face Rabble Droid. The game ends with Rayman celebrating his victory with the Rabbids. 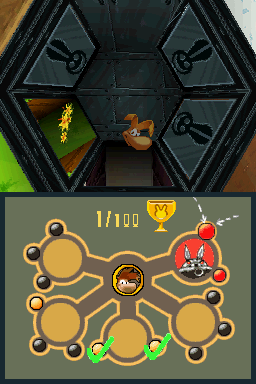 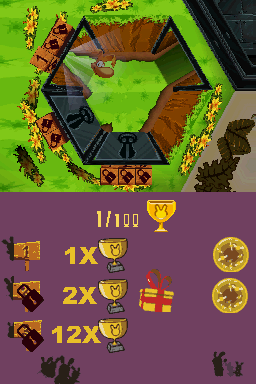 The second area of the Colosseum.

The game starts by placing the player in the Colosseum, the main hub area, where the player can go on to select a level to play. The Colosseum is split up into five different areas, with all except the final and first one containing three levels. Each area has a specific theme in which all the levels within the area take place in. The first area has a beach theme and acts as a tutorial area. The second area a forest theme with many hovering wooden obstacles for the player to use to get through the levels. The third area has an old ruin theme with inspiration from Egyptian pyramids. The tone is much darker here with elements which resemble those from the Cave of Bad Dreams. The fourth area has a more industrial theme to it with elements from the Tomb of the Ancients. Lava is the main obstacle to overcome here with it being found underneath most platforms. The fifth and final area is home to only two levels which both serve as boss encounters. The first one takes place in a snowy environment where the player has to face off Colossus. The second level, which only unlocks once 90 trophies have been collected, has the final boss encounter which is against Rabble Droid.

Each level in the game, except for those in the first and fifth area, have either two or three paths. These paths split into their own direction during one point in the level, where signs appear to guide the player to the right path. During the start of the game there is only one path unlocked at the time, with the others usually being blocked with a power the player has yet to find. Each path has a set amount of trophies which the player earns upon completing it. The usual amount of trophies is 3, although later levels have more with boss encounters having the most. These trophies are in turn used to unlock more levels throughout the game. Each normal level also has a hidden Gold Lum, which appears as a giant bubble filled with Lums. Upon finding and collecting one, the maximum amount of Yellow Lums which Rayman can hold is increased by 10. By collecting all of the Gold Lums, the player can have a maximum of 340 Yellow Lums.

Each normal level starts off with a side-scrolling segment which has normal platforming elements, such as moving platforms and gaps to jump over, as well as enemies to defeat. Rayman has a similar move set as in Rayman 2 with the ability to jump and shoot and later learn other abilities such as swimming and swinging off of Purple Lums. New powers are obtained by finding a gift, a wrapped present which usually requires finding switches to release. The game has a total of seven powers, four of which are new costumes. The costumes are represented by a certain color and element, each having its own unique powers. They are put to use when Rayman stands on a stone (akin to a Stone of Thought) with a symbol that represents a costume that is needed for that situation. These are the following:

Rayman's primary attack is throwing his fist. By collecting Yellow Lums he is however able to throw them instead to deal twice as much damage and reach further with his attacks. Some enemies can only be defeated using Yellow Lums. Yellow Lums can be found freely in levels, in bags (which contain five of them) and in boxes (which contains three bags once shoot at). Some enemies can be attacked to reveal more Yellow Lums. Some levels also have stones with Red Lums where Rayman can trade in five Yellow Lums to gain more health. By defeating enemies they will drop star items which will raise a special star bar. Once full, the maximum health will increase slightly and the player will level up. Once the maximum level is reached the star bar disappears, although star items can still be collected. Green Lums can also be found which act like checkpoints.

Throughout the game Rayman will earn three new powers through gifts. These are the following:

The entrance to some of the paths is usually marked by an exit sign which takes Rayman to that level. The level exit itself it marked by an elevator which Rayman always enters.

After most levels the player has to play a short minigame which will then become available from the main menu. Each minigame tasks the player with earning a certain number of points to pass. the minigames require the usage of the stylus on the touchscreen. These are the following minigame styles available:

After each minigame the player is put into a trophy challenge. These levels are side-scrollers, although have Rayman running automatically. The player has to use the stylus to guide Rayman through the level by moving obstacles and killing enemies. In the challenges, the player can freely swap between each of the unlocked costumes which each grant a special new ability with the styles. These are the following:

Each challenges has a certain number of trophies, between one and three, for the player to collect. These are usually found on places where the path splits into two, although there is always a sign showing which path has the trophy. The player can also look on the map on the top screen to see the trophies locations. To collect a trophy, the player has to press it to make it drop down and turn solid. Then Rayman can collect it when he reaches it. The challenges also have tornado items which the player can collect and use by blowing into the microphone. This will cause the chasing Rabbid spaceship to get blown backwards. The challenge stages end with Rayman reaching the elevator.

In the final area of the game there is one path in each of the three levels which contains a Rayman Gear part. Collecting all three will finish the Rayman Gear robot which is then used in special challenge stages which appear in new paths in previous levels. These challenges has Rayman automatically flying a robot with the player being able to use the stylus for certain commands. They can touch on any point of the screen to fire using the machine gun. Touching directly on an enemy will fire a missile towards him. The robot can hold a total number of ten missiles at once. Drawing a line between the robot and an object or enemy will throw out a hook, equipped with a plunger. This is used to pull off certain shields, drag in enemies or attach to Clark the Superbunny to fly faster. The player can reel in certain objects by turning with the stylus on the robot. The robot also comes with a shield which can be activated to by holding down on it. The shield protects against attacks, but slows it down.

Each Rayman Gear challenge has Rayman facing the Rabbid Fish Creature which will appear on the corner of the screen during several points. The player has to attach the hook to him and reel him in to be able to shoot his week points. Only one week point can be shoot at a time before he escapes for a while. If the player misses him to many times a one-minute timer will appear until the player fails the stage and has to try again. The Rabbid Fish Creature has takes three hits before defeated in all challenges except the final one where he takes four. The stage ends when he has been defeated. 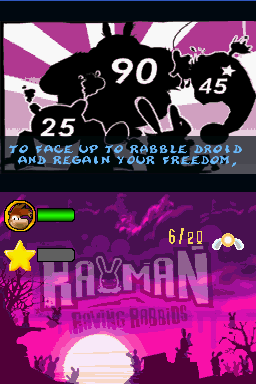 Almost all enemies are Rabbids in some form. Some take just one hit to defeat, while others may take four. Some Rabbids use certain contraptions to aid them, such as trains or submarines, or simply just hide in a box. Most Rabbids attack by throwing plungers at Rayman. There are also Demons and fish which will attack Rayman.

The first boss which Rayman has to fight is Colossus. He is a robot piloted by Rabbids which takes damage when hit by bombs. He can also be attacked once frozen in ice.

The Rabbid Fish Creature is the second boss and is fought several times in the Rayman Gear robot.

The Rabble Droid is the final boss in the game and is fought in the Rayman Gear robot. He will shoot at the robot several times, and each type of shoot will need to be dealt with differently. Some can be reflected back using the shield, while others can be shot back using the machine gun. For some the hook needs to be used to get the Rabble Droid closer to the robot.

Most of the soundtrack consists of reused tracks from the console version. To fit on the Nintendo DS cartridge most of the songs were compressed which resulted in a lower quality which is noticeable at higher volumes.