Dr. Farayday is a character who appears in Rayman Adventures. He is a member of Rayman's species.

Dr. Farayday appears to be a mad scientist version of Rayman. His hair is white and all spiky, much like the stereotypical "Mad Scientist". He also wears black goggles and gloves, as well as a blue shirt under an unbuttoned white lab coat. His shoes are brown, and appear to have green slime on top. His teeth are also severely broken and chipped, possibly due to failed experiments.

Most electrifying and ex-static scientist in the glade, Dr Farayday is an evil genius and a master in electromancy. Some of his wickedly popular inventions include a floating nuclear-powered disco ball, radioactive soda and a machine that instantly turns baby dolls into monsters!
—In-game description, Rayman Adventures

He can be purchased through the Electro Pack. 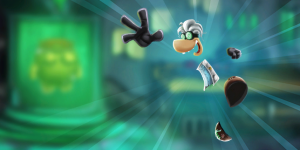