Rayman Adventures is a 2D sidescroller platform game for iOS, Apple TV and Android that uses the same graphical style as Rayman Legends. It was made available in soft launch in New Zealand on July 21, 2015, in Canada on August 25, 2015 and was released worldwide December 3, 2015. This is the first Rayman game to be released on Apple TV on which it was released on October 29, 2015. The Apple TV version has Murfy available in the menus as a cursor due to the lack of touch controls. This also marks the first Rayman game where players can record and share their playthroughs using the Everyplay service.

The game starts with a cutscene in which several Lividstones on flying ships are seen stealing the Ancient Eggs that sustain the Sacred Tree. One egg however falls down and lands on either Rayman or Barbara, depending on which character the player chooses to start playing as. The chosen character then chases down the egg until they finally catch it. Upon catching it a creature, known as an Incrediball, hatches from the egg explaining what just happened. The player then meets up with the Captain who helps them out on their quest to save all the eggs using his Viking ship.

Rayman Adventures is a running game just like its UbiArt mobile predecessors, but unlike Jungle Run and Fiesta Run, the player can change the direction they are running. The game has levels that the hero can explore, albeit while running constantly, with the ability to change direction while playing. Consequently, it remains an auto-running style of gameplay, but with a differing approach. New to the game are small roundish creatures known as the Incrediballs: the goal of the game is to rescue them. Once rescued, they will assist the hero in their quest. Each Incrediball have their own unique ability to help the hero, such as being able to detect nearby Teensies, protecting the hero or being able to collect a bunch of Lums for the hero. In each level the player can use up to three Incrediballs at a time, provided they are not tired after a level. If they are, they can be reawakened by feeding them with food (seen in the game as a chicken leg). There are three main categories that the Incrediballs are divided into - Seekers, who use a torch to show the player up to three secrets such as Teensies and Skull Coins; Protectors, who act as a temporary shield if the player takes damage; and Inhalers, who use their trunks to inhale nearby Lums.

The game is divided up into adventures which contains 3 or 4 levels each and can not be revisited once the player has left the Adventure Map and chosen a new adventure. Each level has 3 rewards the hero can get depending on their amount of Lums or time, depending on the type of level. There are 4 types of levels: exploration levels, Lum levels, brawler levels and time challenges. Each adventure has a harder optional level with a skull on the icon. If this level is completed the player is awarded with twice the amount of gems and food as from a normal level. 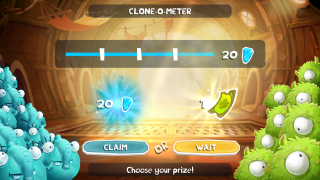 Once all obligatory levels in an adventure are completed the player will get an egg to hatch. There are four type of eggs; bronze, silver, gold and crystal eggs. These eggs are either surprise eggs or normal eggs. The normal bronze egg grows the tree 10 meters, the silver 20, the gold 30 and crystal 40. The surprise eggs on the other hand will hatch a surprise gift, such as gems or elixirs. Originally surprise eggs, then known as duplicate eggs, would fill up the clone-o-meter by 1 step if it was a bronze, 2 for silver etc. Once the clon-o-meter was filled up the player would get the choice to either get 20 gems or wait to get a lucky ticket. Waiting a second time would earn them a golden ticket.

There are currently a total of 380 Incrediballs to earn. Each time the player gets one they grow their tree a bit higher and then they are added to the Sacred Tree where they are grouped in families. Finding all in one family grants them a reward. When the tree grows it will sometimes hit presents that are above it. The presents can unlock new worlds or gems. New Incrediballs are frequently added through app updates and some can only be obtained during timed events. 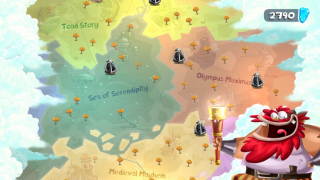 The world map that displays all of the worlds in Rayman Adventures.

The worlds in the game are based on the worlds from Rayman Legends. For example, Medieval Mayhem is based on Teensies in Trouble. The new worlds are unlocked by collecting Incrediballs and growing the Sacred Tree. 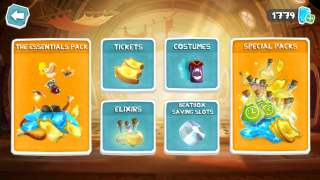 The shop in Rayman Adventures.

Rayman Adventures introduces a shop similarly to Rayman Fiesta Run, though this time items are purchased using gems which the player earns from daily rewards, by completing levels etc. The different items that are available to purchase are following:

Events are timed events which have appeared since version 1.4.0. Each event has one or several exclusive seasonal Incrediball families and one exclusive costume which can only be purchased using the event's seasonal currency. As of May 2018 there has been 3 types of events and 11 events in total: 6 hunt events, 2 spin wheel events and 3 marathon events. In hunt events, the currency can be found on the Adventure Map and the Sacred Tree. In some of the earlier hunt events they could also be obtained in levels by defeating Rabbids. In spin wheel events, the currency can be obtained by spinning a wheel and completing a random level from a specific category to get a specific amount of the currency, while in marathon events the player must compete on global leaderboards to go the farthest they can until they die. As of version 3.2.0, if the player dies in the level they can revive themselves with either Gems or by watching an ad. As of May 2018 there has been 3 different locations for the marathon events. The Land of The Livid Dead, the Desert Kingdom and the Golden Kingdom. After an event has ended, the game gives players a few days to spend the last of their event currency before it is gone forever.

Rayman Adventures has received the most updates out of any game in the series with new ones still coming frequently. The most common updates are the ones with a new event, which usually also change the app icon. 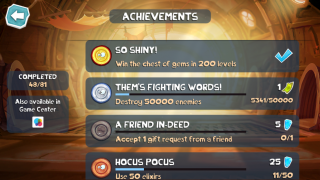 Some of the achievements in Rayman Adventures.

Rayman Adventures, unlike previous mobile games in the Rayman series, now has in-game achievements. Each achievement has three levels of completion, bronze, silver and gold. Each time the player completes one of the steps they get a reward and the achievement requirement is raised for the next step. The rewards they get are either lucky tickets, gems, food or elixirs. The game has 81 achievements counting all necessary steps to complete them.

Rayman Adventures is the second Rayman game to feature cloud syncing, with Rayman Fiesta Run being the first. Unlike Fiesta Run, the cloud syncing is now automatic as the players profile is always stored on the servers. The player has the option to keep their progress synced through Facebook and GameCenter (only on iOS). There is also an option to receive a save code which if entered on another device will connect the games to the same profile. Cloud syncing does not work across different platforms (iOS - Android).

Rayman Adventures is the first Rayman game to allow players to share their gameplay through Everyplay. Videos can only be shared once the level has been completed. The shared replay will show some basic information, such as the character used and the player's score.[1]

On October 1, 2018 the Everyplay service was shut down, thus removing the option to share videos in Rayman Adventures.[2]

Like us for some exclusive content, sneak peeks into the upcoming updates, fun contests and more! Visit: Facebook.com/RaymanAdventures

Rayman Adventures is the third Rayman game to allow for connection to Facebook. Doing so will keep the players profile synced through Facebook and grant them the exclusive Raybox costume. The player will then also see their friends scores upon completing levels and their Sacred Tree when viewing the leaderboards. Friends can send gifts to each other each day, which can be food and gems. Gifts can also be sent to GameCenter friends on an iOS device. Upon completing a level the game will allow the player to share a screenshot from the level through services such as Facebook. This does however not require the player to be signed in within the app itself.

By exploring the game files a lot of unused content can be found. While most of it are leftovers from Rayman Legends there are also some new discoveries there. An unused event named "Rayman's Glade of Adventure" is mentioned, several unused levels are kept as well as unused costumes.