Giant jellyfish are enemies which appear in Sea of Serendipity and Angsty Abyss in Rayman Origins and Rayman Legends.

They are similar to the jellyfish, but they are longer. They also attack by contact. Sometimes, they appear in groups and their movements follow a predefined pattern. Unlike regular jellyfish, giant jellyfish have only one thick tail.

In these games, those creatures appear in the sea worlds. Their first appearance is in the level Swimming with Stars. In the Murray of the Deep boss level, Creveton charges orange giant jellyfish on the heroes. The orange ones do not have a predefined path to follow and chase the heroes instead. 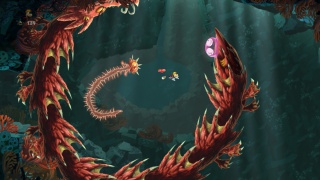