Swimming with Stars is the second level of the Sea of Serendipity, and the fourth world in Rayman Origins. In this level, the heroes will swim in both brightly lit and darkened areas; the latter requiring abyssal firefly krill providing light to avoid the tentacle claws. The PlayStation Vita version of Rayman Origins features a Ghost Mode of this level. Despite the level being the first from this world and twenty-sixth overall that is included in the Back to Origins painting in Rayman Legends, the first playable level in the painting is Freaking Flipper.

As the heroes dive into the water, the tune with the friendly fish singing plays again, despite the fact that the fish are not present. A new enemy appears in this area, the sea anemone; most of them throughout the world can be forced to retract if the heroes hit their bulb, though hitting their bulb a second time will release them again. The heroes will need to reach the exit while avoiding the tentacles of these anemones.

The fish singing tune ends, and a more sinister tune plays. The heroes need to advance by swimming deeper, while avoiding more groups of sea anemone and spikes sticking out from the walls. The first Skull Coin can be found by swimming through a tight space between two platforms to the far right of the area. As the heroes proceed to swim deeper, the second Skull Coin can be collected by waiting for the jellyfish to spread out away from the coin. The heroes can now proceed to the exit. 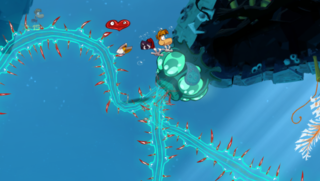 The first relic can be found just below Rayman, inside the bulb.

The first relic can be found in this area; it is located inside a bulb of a sea anemone.

As the place gets darker, the heroes must continue to swim even deeper, while avoiding the giant jellyfish that appear throughout the area. The third Skull Coin can be collected by waiting for a lone jellyfish to move out of the way of a tight space, then swimming through the space to reach it. The heroes can now proceed to the exit, while avoiding the spikes sticking out along the way.

It is completely dark in this area, but fortunately a group of abyssal firefly krill will follow the heroes. These are useful for proceeding through the dark cavern, as the light will scare away the tentacle claws. The heroes will need to move quickly, as the krill won't last long. The first secret area can be found by swimming upwards around a long sea anemone. Afterwards, the heroes can find their way to the exit. 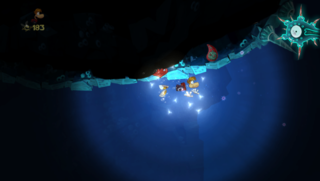 The second relic can be found just above Rayman.

The second relic can be found near the top of the area, next to a sea anemone. 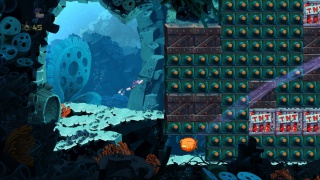 In front of the heroes are a bunch of blocks. The green ones can be destroyed, while the brown crates cannot, and they will have to be avoided if they start to fall. The heroes will need to quickly flee from the TNT crates if they attack one. There are also Blowfish which need to be defeated in order to break the Electoon cage.

In this area, there are no abyssal firefly krill surrounding the heroes, though there are lone luminous fish with a limited amount of light around them. This makes it tougher to avoid the nearby tentacle claws. The heroes will also aid the light of an Anglerfish. The fourth Skull Coin can be found by swimming down to a dimly lit area with a group of horizontal moving jellyfish. Afterwards, the heroes reach a bright area filled with Lums, jellyfish, and a Lum King. If the heroes swim straight up, they will encounter the fifth Skull Coin of the level. The heroes will now be aided by the help of another Anglerfish to reach to the exit. 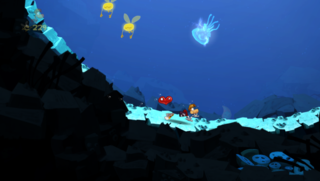 The third relic can be found just in front of Rayman.

The third relic can be found below the jellyfish and the Lum King in this area. 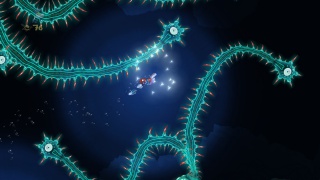 Rayman swimming by a bunch of sea anemones.

Again, the heroes will need to use the abyssal firefly krill, as the heroes are now in an tighter area filled with sea anemones, tentacle claws, and jellyfish. The sixth Skull Coin can be retrieved by avoiding some sea anemones close to a another spot filled with krill. Afterwards, the heroes can proceed to the exit.

Similar to the fifth area, the heroes will need to be careful, as they use the light from the luminous fish, along with an Anglerfish to advance. As the heroes proceed, they can find the second secret area, by using a couple of luminous fish to reach an area where then can swim down through a tight space. The exit is not too far away, and can be found close to more green luminous fish. 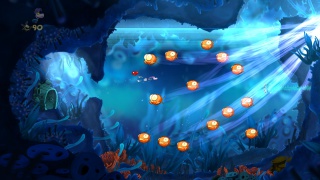 There are a lot of Blowfish in this area, but there is also a giant jellyfish that will follow the heroes in order to hurt them. Once all of the orange fish are destroyed, the cage can be broken. 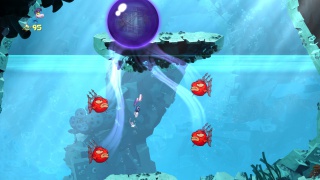 The final area has four Redfish protecting the cage.

In this bright area, all the heroes will need to do is defeat the four Redfish in order to break the Electoon cage, ending the level; the heroes pose on the photoboard as the Magician waits for the total amount of Lums that were collected throughout the level.