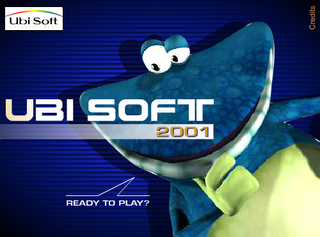 Globox 2001 is a Flash game made by Ubisoft to celebrate the New Year of 2001. The game involves Globox shooting various creatures in different locations on Earth. The game is not available on Ubisoft's websites any more but has been archived by fans.[1]

In this game the player has to shoot down various targets within a given time limit by clicking on them. The game consists of nine levels. After every three levels the location changes to another one, as well as the gun being used, both of which are just visual changes though. In each location there are three kinds of targets: A skull with a hat, a Globox-like creature with a hat and a skull pattern on his belly (similar to the one of Hardrox) and a Globox-like ghost. The skulls are the only enemies that have the ability to attack. Once one appears, the player has only a limited amount of time to shoot it down; otherwise the skull will shoot, causing the player to lose one life and having to restart the level. If the player loses all of the three initial lifes - either by getting shot or by timing out - the game is over. The ghosts are the only targets that are not mandatory to hit to finish a level. However, shooting them increases the players' score. Once all nine levels are finished the ending screen appears where the final score can be seen.

The points for each kind of target is listed in the table below.

In order to maximize the score, the following tips should be considered: